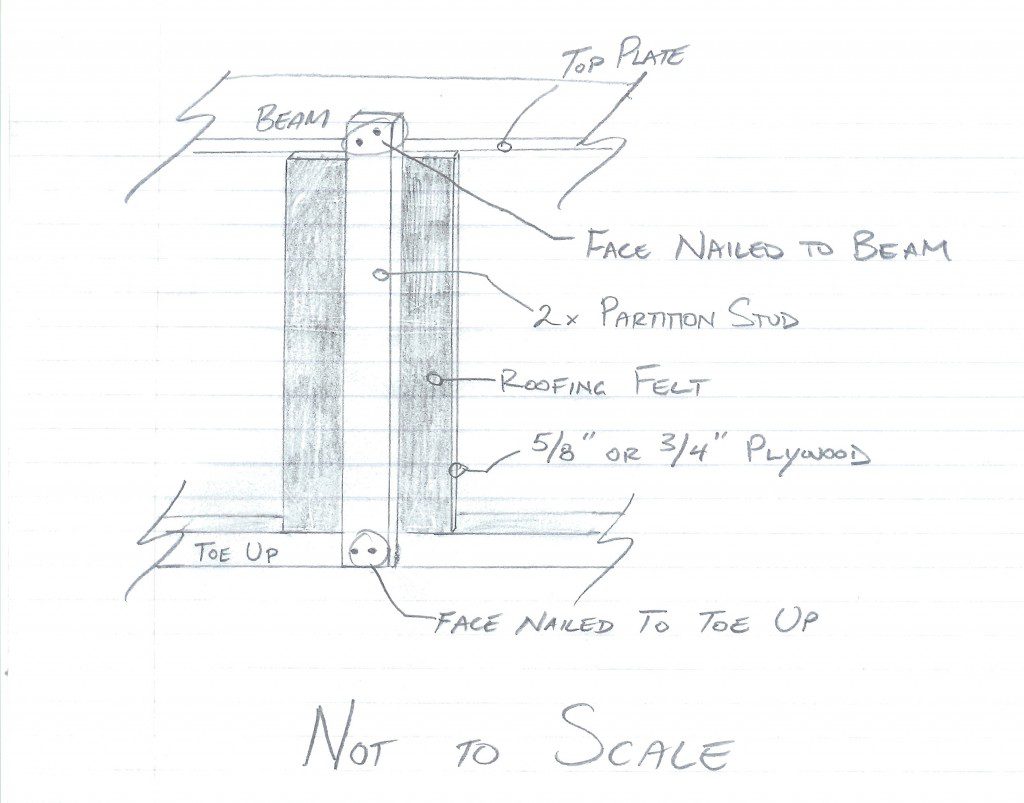 1. The stud that sits on the plane of the bale wall where the two walls intersect is in the way when baling.

2. There’s nowhere to nail mesh along the wall intersection.

I’ve outlined how to deal with both of this issues in this post. The picture above is descriptive of the solution to the second issue.

To handle the first of the two problems, all you have to do is plan ahead. Cut your studs and build your interior partition walls; however, leave off the studs that intersect with the bale walls. Spray them with Bright Pink or Orange spray paint with the word “SAVE” and place them near the partition wall to which they belong. If you have several walls with varying plate heights, you can label each stud with a letter or number that corresponds to the wall to which they belong.

Now that the stud has been set aside, you can build the detail that’s outlined in the drawing above so that you can solve issue number 2. Cut a piece of 5/8″ or 3/4″ plywood so that it fits in between the top plate/beam assembly and the toe up. It should be wide enough to extend 6″ past each side of the stud. It does not have to fit tight to the beam assembly or toe up. Just cut it so that it’s within a couple inches of each when installed. Cover the face of the plywood with roofing felt. Now attach the plywood to the stud by nailing through the plywood into the back of the stud. Be sure the roofing felt is facing the stud and that the plywood is centered properly in between the plate/beam assembly and the toe up.

You’ll need to notch the bales to allow the plywood to sit in them such that the face of the plywood/back of the stud is flush with the face of the bales. Now you have a stud that you can attach the drywall to AND you have nailers on either side of the stud to attach your mesh to. Because the nailers are 6″ wide, you can install the mesh before or after the drywall has been hung. This helps speed up the process because if you hire a drywall sub, they can get to work while you are still baling, moving the whole project forward faster.

You can learn even more about attaching partition walls and so much more in our comprehensive How-To Instruction Video Series. It contains over 10.5 hours of top-notch, professional quality instruction on everything from foundations, to framing, to baling (post and beam and load bearing), to plaster. You even get a FREE set of the Mountain View Cabin construction plans with your purchase. All for only $40 and it’s delivered instantly to your inbox.