I live in the country and am quite aware of the places fires start: leaves under the deck, debris in foundation vents, trees not properly maintained near the house, etc. If you live in fire prone areas, be sure to read on about attic vents and wildfires. 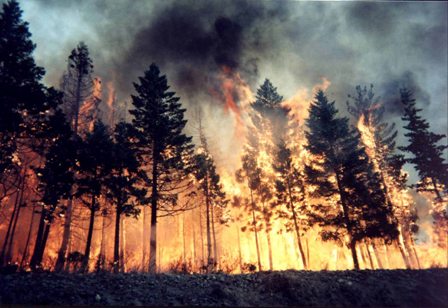 My sister was an evacuee in the major San Diego Fire. She lives in Rancho Bernardo. She is an area coordinator for neighborhood watch. At the last meeting after the fire an attending fire captain explained an interesting phenomena many of the homes that were destroyed and had tile roofs had something happen to them that most other homes did not.

The fires started in the middle of the building not the out side. After a through investigation the fire dept. came up with two causes. The first was that homes that had curved tile roofs and did not have bird blocks embers blew between the tiles and started the roofs on fire under the tiles. The second cause was that older tile roof home had attic vents that had 1/4 ” mesh screen or larger and the embers just blew through the screens into the attic causing the fires. When the winds came through the Rancho Bernardo area they were around 40 to 60 mile an hour.

It was like a blast furnace and temperatures in some areas exceeded 2000 degrees. With the wind blowing in a horizontal direction the heat and the winds blew embers and extremely hot air into the attics of the homes. The fire dept. is now recommending that new homes and older ones be fitted with attic vents of 1/8 ” to prevent small embers from being blown into the attics. The only problem here is that the mesh being extremely thin my also melt or burn at lower temperatures. You may want to pass this information on to straw bale builders and run it by your local fire dept.

Andrew has a passion for straw bale construction that is matched only by his desire to teach his knowledge to others. He has a wealth of experience in designing and building conventional, tiny, and straw bale homes. After years of building, he has moved his practice entirely to consulting and teaching. He shares his knowledge with thousands of people via his DVD series, this website and the roughly six hands-on workshops he teaches each year.
View all posts by Andrew Morrison →
How Tall Can a Straw Bale Building Be? StrawBale.com
Staying Dry & Healthy: Mold Spores in Straw Bale Homes