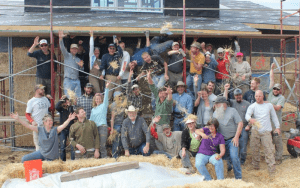 It’s that time of year again. The time when I make the official call for host applications for the coming year’s straw bale workshop season. To be honest, I have already had several people send in their applications ahead of the official call. I guess some folks are just that excited to get started!!!

If you would like to be considered as a straw bale workshop host for 2017, please click here and fill out the host application. Be sure to answer all of the questions so that I have as much detail about your project as possible.

It’s not only an incredibly fun week, it’s an incredibly productive week. Consider that the work we accomplish in 7 fun filled days (and believe me, they truly are FUN) would take two people 15 1/2 WEEKS to complete on their own. That’s with full, 8 hour days for the 15 1/2 weeks. Ouch! Much better to have an enthusiastic and dedicated work force come and knock that work out in a short 7 day period.

Over the years, I have held a straw bale workshop on over 50 different locations and we always manage to get a ton of work done, while somehow still having fun. It’s hard to imagine putting in a long work day of physical labor and then still having energy to sit around a campfire late into the night telling stories, laughing, playing music, and making new friends, but that is exactly what happens.

I typically get a lot of host applications for each straw bale workshop season, so be sure to get your application in early and to “sell” me with the details. I don’t want to make it seem like you need to sell a used car in your application, but it certainly helps to have as much information about the project and the surrounding area as possible when I review applications.

Finally, I ask hosts to attend a workshop before they host their own. Unfortunately (or fortunately) almost all of my straw bale workshop locations have sold out for 2016. I only have two left: New York (which starts next week) and Texas (which takes place in October). If you haven’t already attended a straw bale workshop with me, I really want you to do just that before hosting. There is so much to know and having that experience under your belt will make hosting your own straw bale workshop so much easier.

I look forward to reading all of your applications and working with some of you in 2017.