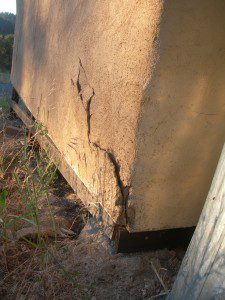 I recently responded to an email about cracking in plaster. The person reported seeing cracks through all three coats of plaster along the joint between the top of the bales and the wood box beam. She has tried a lime wash patch, which made things worse or at least more noticeable, and she was asking what to do. My response is below.

It sounds like the joint between the wood box beam and the plaster is opening up. This usually happens when the wood has not been separated from the plaster. In other words, if the wood was not covered with roofing felt, the plaster would be adhered to the wood. The problem here is that wood moves at a different rate than straw so you get stress fractures at the joint between them. Another potential problem is that the joint was not reinforced with plaster lath or some other structural mesh.

For the same reason stated above you need to span the joint with a structural mesh so that the plaster can hang on to that and the different rates of movement are absorbed and moderated by the mesh. The mixing ratio of the mud could definitely have an affect on things as well. My first assumption, not having seen or heard about the construction of the building, is that it is related to the items above, not the mixing ratio. If so, the only fix is to deal with the problem. If it is a lack of roofing felt, you may need to tear out the plaster and start over in that area.

Shy of such a drastic fix, you could try using fiberglass mesh tape (like drywall tape but get the higher quality plaster tape) placed over the crack and then embedded in fresh mud. This should give the plaster enough strength to withstand the movement of the plaster beneath it. I would certainly try that first.

Andrew has a passion for straw bale construction that is matched only by his desire to teach his knowledge to others. He has a wealth of experience in designing and building conventional, tiny, and straw bale homes. After years of building, he has moved his practice entirely to consulting and teaching. He shares his knowledge with thousands of people via his DVD series, this website and the roughly six hands-on workshops he teaches each year.
View all posts by Andrew Morrison →
A Hidden Cost of Building with Bales: Heater Electric Bill
More on Fire Rating in Straw Bale Wall Systems