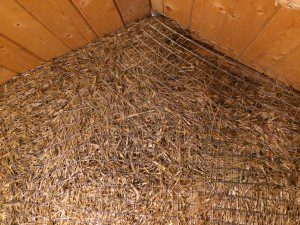 It was immediately obvious while working on the exposed timber frame in Arlington, Vermont that the natural cut timbers would not line up perfectly with the plane of the bale wall once complete. Having a large curve where the wall meets the ceiling is not a great finish so was not an option for us. What we did ended up working really well and created a beautiful and STRAIGHT wall.

As you can see in the photo above, the line at the ceiling is perfectly straight and the wall matches that plane really well. In this photo, the left side of the wall is complete and there is a gap along the wall on the right side. The rafter is visible behind the mesh on the right so you can see how much stuffing was necessary to fill the gap between the new “straight line” and the original curve of the wall. The photo below is a close up of the right hand side of the above image. 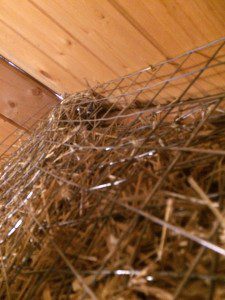 The original mesh was installed over the bales and attached to the rafter which creates a curved top to the wall. The space between that curve and the new mesh is visible in this photo. The “new line” of the wall is created by pulling a plumb line off of the bale-wall plane to the ceiling and then snapping a chalk line along those new points. The new mesh is then attached to that chalk line with 1 3/4″ staples to provide a strong point of attachment to pull against.

Once pulled taught, the space behind the new mesh is stuffed to create a solid and straight wall. There is a bit of “stuff, check, re-stuff” that takes place in this process so it’s not as straight forward as my simple explanation would suggest. Once the wall is stuffed to the right density, the new mesh is attached to the previously installed mesh with zip ties, anchoring it in place.

This is a very simple way to “clean up” a crooked wall while providing excellent backing for the plaster. Have you run into situations like this? If so, what did you do to fix the crooked wall?

2 Responses to Creating Straight Bale Walls On a Crooked Frame