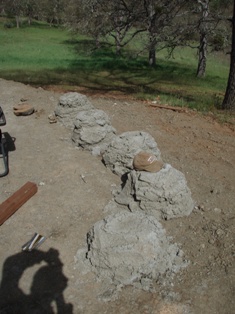 Okay so it’s not poop, but it could be from a distance! These left over piles of concrete. It is so important to calculate materials well and it could be the straw that breaks your back. (I meant that pun by the way.) In this case, the truck load was too short for what the concrete guys had planned so they had to thin the slab thickness which ultimately left a lot of excess concrete. To be sure, I mentioned it to the concrete company owner. It was a mistake, and not a huge deal because the slab in this case was so small; however, on a big job, the little extras can run wild quickly.

Estimating is very difficult to do well, especially if you are new to construction. Even well seasoned professionals make mistakes, so a little extra money in the construction budget for mistakes is a great idea. That said, the better you can get at estimating the more economical your house will be. Take some time to learn the basics of estimating. Get a book or two on industry standards. I suggest you add at least 10% to the industry standard as that standard takes into account professional builders working at a rate common to the industry: something you will likely not be doing.

On most materials like framing lumber and roofing, you can underestimate and the impact will be small on the building. For items like concrete which have to be poured all at once, you don’t have that luxury. In cases like that, I recommend you split your pour into several smaller pours. That way, you can get the basic idea on the first two sections. If you have extra mud, you can place in the next section and spread it out. It will simply reduce the amount of mud you need in the next pour via displacement. By the time you get to the final pour, you should have a good idea of exactly how much mud to order. This also makes finishing the slabs easier on your back and knees!

Andrew has a passion for straw bale construction that is matched only by his desire to teach his knowledge to others. He has a wealth of experience in designing and building conventional, tiny, and straw bale homes. After years of building, he has moved his practice entirely to consulting and teaching. He shares his knowledge with thousands of people via his DVD series, this website and the roughly six hands-on workshops he teaches each year.
View all posts by Andrew Morrison →
Shaping Bales in a Straw Bale Build – StrawBale.com
Starter Shingle Course on Roofs on a Straw Bale House