By Andrew Morrison in Construction Details, Tips and Trade Secrets 0 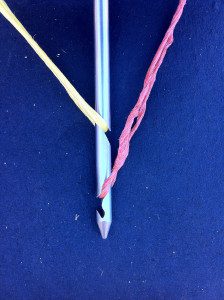 Having built a number of straw bale houses now, my crews have started to focus on production. By this I mean they are always looking for ways to make the bale stacking, tying, and meshing go faster. We have developed a better straw bale needle in that effort (the plans for which can be purchased on my website), as well as other tools like “the salad fork.”

The salad fork is a large steel fork used to stretch the mesh tight against the bales. It is a simple design and yet it speeds the application of mesh 10 fold and gets the mesh tighter in the process. Therefore not only has the meshing gone faster, but the sewing and plastering is made easier as well due to the tightness of the mesh to the bales.

Another item of baling that often slowed us down was notching around posts. The biggest problem came when a notch was cut too narrow and then had to be fine tuned. Once a notch is cut, it is much harder to make it slightly larger. It is better to err on the side of cutting a notch slightly too big. This speeds the bale stacking process immensely. Now, what to do with the over notched areas around the posts? Well, we used to stuff them or place burlap over them with straw behind the burlap. Guess how much time that wasted?

Now we simply cut the roofing felt used to separate the wood framing from the plaster a bit wide and the notch is gone! The amount of lost insulation is completely invisible as the plaster will cover the whole along with the roofing felt and the bale itself is still roughly 14″ thick, even where the bale is over-notched!

Using engineered shear panels also speeds the process in a HUGE way. The panels eliminate the need to staple the mesh every inch to the house and it also minimizes the amount of sewing required for the mesh. The panels take all the engineering out of the plaster skins and keep it in a place all building officials are comfortable with: engineered products backed up with manufacturer and third party testing. This moves the house through the building department faster and also gets the home built faster.

The slowest parts of building a bale house are plan review, retying bales, notching bales, applying mesh, and sewing walls. The above tips and tools speed up every single one of those processes in a big way. If you have any speedy tips, I would love to hear about them and I’m sure my readers would too!

Andrew has a passion for straw bale construction that is matched only by his desire to teach his knowledge to others. He has a wealth of experience in designing and building conventional, tiny, and straw bale homes. After years of building, he has moved his practice entirely to consulting and teaching. He shares his knowledge with thousands of people via his DVD series, this website and the roughly six hands-on workshops he teaches each year.
View all posts by Andrew Morrison →
Building Codes: Getting Approval for Straw Bale Homes
Straw Bale House For Sale in Ashland, Oregon