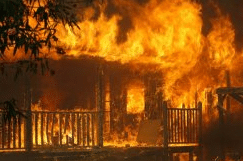 Sorry it has been so long since I last wrote. Things have been very busy around here with building and preparing all the paperwork necessary to start and fund the next four houses we will be building. We start the foundations of 2 next week, have one ready for baling, and one is a major remodel which starts with demolition in two weeks. We also have 2 more homes in the final design phase ready for bank funding next month. All in all, it is an exciting time. I recently received a copy of the article in the Wall Street Journal about the recent fire testing of straw bale wall assemblies. I have attached it here for you to read. The results of the fire testing will be up on the web for review by September. Keeps your eyes open for the report!

Will Insulating With Straw Catch Fire?

IN A LABORATORY in Elmendorf, Texas, last month, workers fired up a super-hot gas furnace next to a wall stuffed with straw in hopes of calming skittish insurers, bankers and building inspectors who have been reluctant to embrace big buildings insulated with bales of dried grasses.

Things got off to an inauspicious start for Bruce King, the engineer and straw-bale construction fan who raised the $35,000 for the independent test. Within minutes of being exposed to the 1,700-degree heat, cracks developed in the fire-resistant plaster covering the wall, and the straw inside began to char. But after two hours, the other side of the wall was unscathed. Then, it survived the second part of the industry-standard test for building-material safety, a high-pressure soaking from a fire hose.

“It opens the doors to every realm of construction,” says Mr. King, who operates a straw-bale advocacy Web site and is writing a book on the construction material.

So far, a 1980s revival of straw-bale construction — which originated in the 1890s on the arid plains of Nebraska where the ground was too dry for settlers to build from sod — has been limited to survivalists and high-end, eco-oriented homeowners. There aren’t any official measures of the number of straw-bale buildings, but advocates estimate there are several thousand in the U.S., most of them single-family homes. But now, responding to the demand for more so-called green buildings, architects and builders are starting to use dried rice and wheat stalks in larger, more public facilities such as schools, churches, wineries and transit facilities. There, the building standards — and potential consequences of a fire — are much higher than a single-family home.

Straw proponents believe the successful fire test will persuade more mainstream builders to use straw bales instead of the standard fiberglass or foam insulation.

In the absence of a fire test, most insurers have balked at straw-bale construction, according to the Insurance Information Institute, a trade group. American Family Insurance, for example, refuses to cover it at all. “We have concerns with how these homes would hold up in loss situation involving fire smoke and water,” says Steve Witmer, spokesman for the Madison, Wisc., company. “There’s also cost factors stemming from limited experience from contractors in repairing these types of homes. And we’re not sure about the availability of building materials.”

Straw-bale buildings look similar to other buildings, though they have two-foot thick exterior walls covered in a stucco-like plaster, often giving them a Southwestern adobe feel with thick curved walls. In most cases, as in traditional construction, wood or steel beams carry the weight of buildings’ floors and roofs. The bales are inserted between the studs or beams. Chainsaw-wielding workers trim the straw to fit electrical boxes or architectural features such as curves in the wall. A thick coat of plaster covers the bales, keeping them dry and protecting them from fire.

Inch for inch, straw bales insulate about the same as fiberglass, but because they are so much thicker than typical rolls of insulation, they provide a stronger shield against heat and cold. Straw bales often are procured from local farms, reducing pollution that comes from transporting construction materials, a key concern of green-building advocates. Straw is also easier to dispose of because it’s biodegradable. A small house would use 150 to 300 bales.

The walls of a transit building in Santa Clarita, Calif., are insulated with straw bales and covered with lime plaster. Designed as a demonstration project for eco-friendly building, there were some problems during construction because of the novelty of the materials, but the architect says it has performed well since opening in April.

Architects who’ve worked with both forms of insulation say the cost of using straw bales instead of fiberglass can be about the same to 10% more. While the actual bales cost less than industrial-made fiberglass insulation, labor costs can be higher because contractors aren’t accustomed to it. A 24-by-16-by-48-inch bale costs about $3.

The fiberglass-insulation industry doesn’t sound worried that straw bales could usurp its place between the walls of buildings. “It’s a very specific niche of the market versus being used by big production builders,” says Robin Bectel, spokeswoman for the Virginia-based North American Insulation Manufacturers Association.

But straw bales are beginning to be found in larger projects nationwide. The Friends Community School in College Park, Md., is building its new schoolhouse with straw bales. The school for 165 kindergarten-through-8th grade students is due to open this winter. Schools have traditionally been made of brick and steel to lower the fire risk. “We did the research,” says school head Tom Goss, referring to some nonofficial fire studies. “Straw bales operate like a mattress. They’re so compacted there’s no way for air to get in there.”

But parents had other concerns, he says. What about mice and rats? “We found out that straw doesn’t have food value,” says Mr. Goss. “It’s the equivalent of wood.” And since there are no seeds in straw, there are also no worries about allergies. The school will cost $5.7 million, not significantly more than if it were built using traditional wallboard with fiberglass insulation, says project architect Peter Doo of the Baltimore firm Hord Coplan Macht, Inc. Local building officials, who had some experience with straw-bale homes in the area, approved the school.

It was a different story for Aerzen USA Corp., an industrial-blower manufacturer in Coatesville, Penn. It wanted to use straw bales for a $3.5 million manufacturing warehouse and office, but a local building official didn’t want to approve the project without an official fire test. And to boot, the cost came in 10% over budget. “We can’t charge our customers 10% more so we can have a straw-bale building,” says Aerzen USA president Pierre Noack. The building, set to start construction soon, will still be eco-friendly, with lots of traditional insulation to conserve energy. “In the end, the bottom line wakes you up,” he says.

Building-safety officials are conflicted about the fire issue because making straw-insulated buildings fire-safe could make them vulnerable to another risk — water.

The Desert Living Center, owned by the Las Vegas Valley Water District, will be the largest straw-bale complex in the country when its five buildings open in 2007. When the architects submitted plans, the Las Vegas building department said because it had been designed with enough emergency exits, the center didn’t need fire sprinklers, even though buildings of its size usually require them. The officials feared that if the sprinklers were set off accidentally, the walls would get wet and need to be replaced. In the end, the local fire marshall insisted on having sprinklers. “That’s my biggest nightmare,” says Jeff Roberts, the project architect with Las Vegas architects Lucchesi, Galati Architects Inc. “If the walls got wet, they’d have to come down.”

Building with straw can pose other challenges. The city of Santa Clarita, Calif., wanted to use a $26 million transit-administration building as a straw-bale demonstration project. “The city saw this as a good opportunity to set the tone, to show local contractors who come in bellyaching about what it costs [to build green] to say, ‘Here, we did it,'” says Charles M. Smith, a vice president at Hellmuth, Obata and Kassabaum, the project’s architect.

Things didn’t go as planned. The straw-bale sub contractor and the architects fought over the design of a wall that supports a long span of windows. Outside experts had to be brought in to mediate. Then construction workers who had never worked around straw mistakenly removed 2 x 4s that kept the bales straight and climbed all over them, forcing the bales out of position, says Mr. Smith. An improperly installed drain on the roof let winter rains soak the bales before they had been plastered. Two-thirds of the bales got moldy and had to be replaced.

Still, the facility opened in April and is performing well, the architect says. “The lessons learned is that with straw bale, everything has to happen perfectly for it to go right,” says Mr. Smith. “But it turned out to be a beautiful building.”

Write to Alex Frangos at alex.frangos@wsj.com

Andrew has a passion for straw bale construction that is matched only by his desire to teach his knowledge to others. He has a wealth of experience in designing and building conventional, tiny, and straw bale homes. After years of building, he has moved his practice entirely to consulting and teaching. He shares his knowledge with thousands of people via his DVD series, this website and the roughly six hands-on workshops he teaches each year.
View all posts by Andrew Morrison →
Straw Bale Fire Video and Fire Wall Testing
Shaping Bales Around Openings