By Andrew Morrison in Construction Details, Tips and Trade Secrets 4 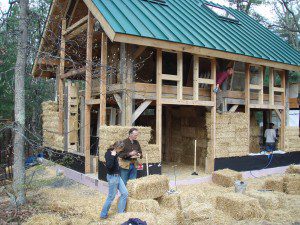 I am often asked what the pros and cons are of laying straw bales flat versus laying them on edge. To me the differences are many and important. Every house I have built I have laid the bales flat. Every time I have worked with folks who have opted to lay bales on edge, the feedback has always been the same: “I would never do that again.” Here is a quick run down of the cons to stacking the bales on edge.

1. Bales on edge cannot be notched around any posts or obstructions due to the string locations.
2. Bale walls have a lesser R-Value due to the thickness reduction of the wall.
3. Bales stacked on edge do not have exposed cut or bent straw and are thus slippery, making plastering more difficult.
4. Any niches cut into the bales will immediately destroy the strings, making the bales more likely to drop loose straw during the construction phase.
5. Anchoring the bales to the frame is harder due to the orientation of the bales.
6. The wall becomes narrower (an advantage from a certain point of view) and the bales taller. The combination makes for a weaker wall when pushed out of plane (perpendicular to the wall face).
7. The inability to notch the bales requires that the framing be set either inside or outside of the bale wall. This creates either a framing difficulty for the roof if the frame is inside the walls or a potential cracking/leaking point of contact where the plaster meets the frame on the outside.

Well, I guess that’s enough. You may understand now why all my homes are built with the bales on the flat!

Andrew has a passion for straw bale construction that is matched only by his desire to teach his knowledge to others. He has a wealth of experience in designing and building conventional, tiny, and straw bale homes. After years of building, he has moved his practice entirely to consulting and teaching. He shares his knowledge with thousands of people via his DVD series, this website and the roughly six hands-on workshops he teaches each year.
View all posts by Andrew Morrison →
Gunnite, Sprayed Plaster, or Hand Troweled for Plaster Application?
How to Deal with Moisture in Straw Bale Walls

4 Responses to Laying Straw Bales Flat or On Edge?