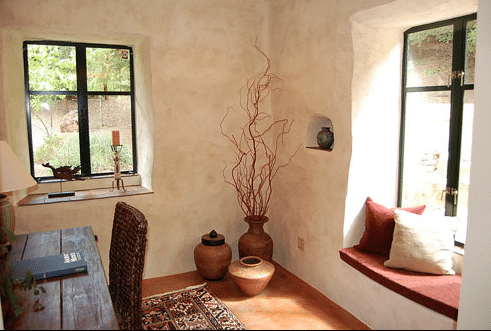 Anyone who has ever built a straw bale home and ordered their plaster from an outside company may be on the look out for a great use for leftover Natural Hydraulic Lime (NHL) plaster. It’s not unusual to order too much material as estimating is difficult, especially for a material that is used to cover the uneven surface of a straw bale wall. In some cases, extra bags of lime plaster can be sold to someone else who is building their own home; however, this is not always the easiest solution. Throwing the material out is not an option for several reasons. 1) Those building “Green” homes are unlikely to throw out an unused building material as that is too impactful on the environment. 2) NHL plaster is not cheap! So, what to do with it?

My friends John and Julia are currently building their own straw bale house and found themselves in the very situation we are talking about. They made a call to the great folks at Pennsylvania Lime Works (www.LimeWorks.us) asking how they might use the excess lime for formed/poured window sills. Below is the response that they received from Andy DeGruchy, the owner of PA Lime Works. By the way, if you decide to work with Andy and his crew on your own project, be sure to use my vendor code (95501NHL) because they will give you a sizable discount on your entire order.

Hi John and Julia. Great idea! You can make lime concrete by using 80% NHL 5 and 20% Lehigh White Portland Cement, Type 1. That is the binder blend and to that you add your pea gravel (or larger crushed stone) and your concrete sand. You would make a mix that would have about 2-1/2 buckets of the gravel/sand blend of which could be a 50/50 mix of these aggregates and then 1 bucket of the NHL 5/Portland blend as the binder.

To make it ever stronger you can lessen the aggregate blend to 2 buckets per mix. The concrete may not seem as hard as regular concrete at first but it will continue to get harder over time. It will reach respectable hardness in two weeks after placement. Dampen it ever day for the first three days but don’t keep it saturated or submerged in water.

Don’t let the wet concrete freeze until cured. It is good to pull the forms off in two days and let air circulate around the lime concrete after it has cured for that short time so that it can more fully carbonate between wettings. By making lime concrete you will have used up your NHL 5 and you will have off-set the huge carbon footprint from otherwise using straight Portland cement in the mix over using a hybrid mix that incorporates NHL. I have a cantilevered balcony at my own house that is a pour of this lime concrete and have used it many other times in other applications and it holds up well.

4 Responses to A Great Use for Leftover NHL