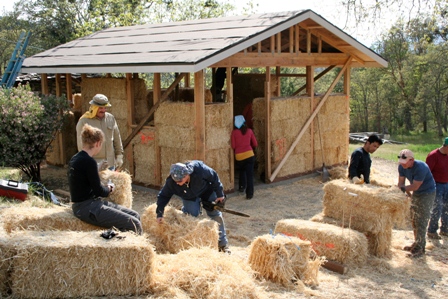 May straw bale workshop Day 2 diary. We were so close! We almost got the whole building baled today. There was a lot to learn including the miller’s knot, how to notch bales, how to stack and stuff walls, and how to keep things as straight as possible. With a lot of hands working hard, we managed to get really close to completing the baling in day two, but we ended up one course short for the majority of the building.

As always, the arrival of bales on site meant that rain was not far behind. At least it wasn’t snow this time! The weather outlook for Wednesday looks good so we should be able to complete the baling and move into the next stage of construction with ease. Our plan to take a swim break at noon may be thwarted as the temperature is forecast to be about 12 degrees cooler than Monday and Tuesday. I guess if we work hard enough the pond will seem perfect no matter what the weather. After all, I had some folks in April who swam even though it was snowy! 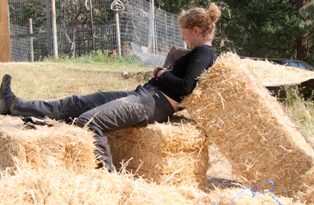 The group has learned quickly and has tried some new techniques out. Some ideas have worked, and others have not. I guess there is no better way to learn than by experience! Everyone managed to break out into teams and accomplish a little bit of each task along the way, getting a taste of all aspects of the job.

Here are a few more pictures from the second day of the May Seven Day Intensive Straw Bale Construction Workshop: 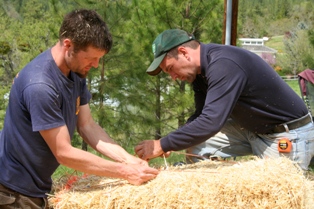 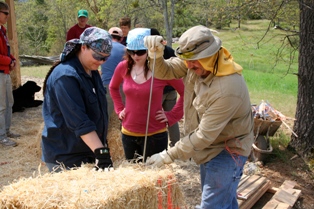 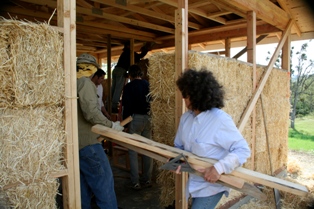 Andrew has a passion for straw bale construction that is matched only by his desire to teach his knowledge to others. He has a wealth of experience in designing and building conventional, tiny, and straw bale homes. After years of building, he has moved his practice entirely to consulting and teaching. He shares his knowledge with thousands of people via his DVD series, this website and the roughly six hands-on workshops he teaches each year.
View all posts by Andrew Morrison →
May Straw Bale Workshop in Full Swing – StrawBale.com
May Straw Bale Workshop Day 4 – StrawBale.com