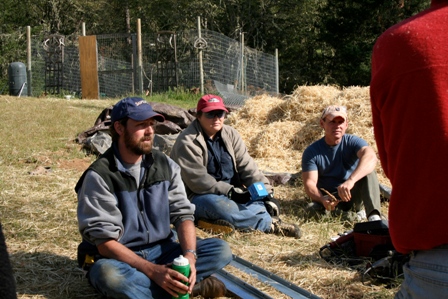 Our May straw bale workshop Day 4 was great. We accomplished a bunch of stuff on the site, the weather was great, and spirits were high. We had several lectures on site that allowed us to slow down and learn to a pace that we could then accelerate into the work.

Once we moved into action, we managed to shape the doors and windows, hang a bunch of welded wire mesh and J-metal, cut and shape two niches, and prepare for plaster. Shaping windows and niches proved to be a interesting task that gave us several different shapes in the end, all of which were well designed and completed. It is nice to see the artistic side of folks starting to shine. 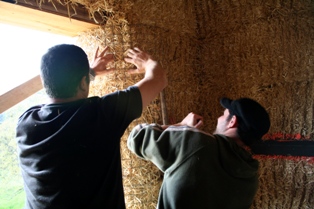 Andrew has a passion for straw bale construction that is matched only by his desire to teach his knowledge to others. He has a wealth of experience in designing and building conventional, tiny, and straw bale homes. After years of building, he has moved his practice entirely to consulting and teaching. He shares his knowledge with thousands of people via his DVD series, this website and the roughly six hands-on workshops he teaches each year.
View all posts by Andrew Morrison →
May Straw Bale Workshop Day 2 – StrawBale.com
May Straw Bale Workshop Day 5 – StrawBale.com