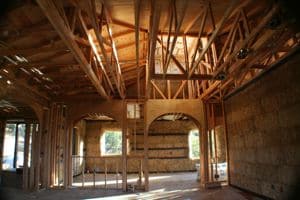 Below is a section from my best selling ebook: A Modern Look at Straw Bale Construction. The focus of the section is on planning for and installing partition walls in straw bale homes. I have also included a detailed description of how to properly layout framed walls. This is a pretty simple process, but you might be amazed at how many people make mistakes along the way.

The mistakes they typically make can all be fixed, but it’s better to learn how to do it right the first time and avoid the mistakes. I hope you enjoy this chapter on framing partition walls. You may find it a bit technical, since it is just a section from within the book, but it will all make more sense in the overall context of the book. 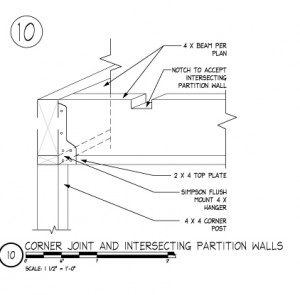 When framing interior partition walls, there are only a couple of differences from conventional construction to keep track of. The first is the connection to the intersecting beam. Because the exterior walls are framed with beams, not double top plates, it’s not as simple a connection as in conventional construction.  Many people opt to just butt the partition wall into the exterior wall and simply nail it. I don’t think this is a strong enough connection. Instead, I suggest that you butt the bottom of the partition wall top plates (known as the primary top plate) into the beam and then notch out the top of the beam to allow the upper top plate (known as the secondary top plate) to lap over it and then nail the secondary plate in place from above. You can see the notch in the diagram to the left. This makes for a really strong connection. 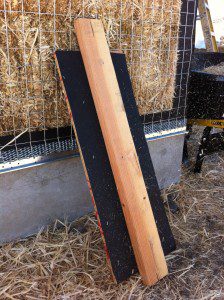 The second detail is to make sure you do not install the last stud in the wall where it meets the exterior frame. Run the bottom plate of the partition wall into the interior toe ups and extend the upper plates as described above, but leave out the last stud. This gives you adequate space to measure your bales for notching as you pass the partition wall locations. Once the bales are completed, install a “partition wall bale stud” (see example in the picture below) against the bales.  This set up provides for proper backing for both your mesh against the bales and your drywall on the interior partition wall.

Many of you already know how to layout a wall properly for modular installation of drywall and plywood, i.e. using 16” or 24” centers. There are some important details that get missed when people are first learning about layout and framing, even when they think they know what they’re doing. For that reason, I have given a quick overview of how to properly layout your walls to ensure you have adequate backing for your interior drywall installations.

As was the case with your exterior wall framing, you want to start by cutting your plates (both top and bottom plates) to length. Don’t cut the secondary top plate (the one that goes on top of the primary top plate) just yet as that will be a different length than either the bottom plate or primary top plate since it needs to overlap the beam or other intersecting wall.

Nail the primary top plate to the bottom plate with 8d nails so that the ends are perfectly flush. Remember to use only a few nails, as you will be removing them as soon as you have completed the layout. Before you mark any studs in the wall, refer to the plans and mark out the location of any doors (if this were an exterior wall, you would also locate windows at this time). Most residential plans typically mark the center of openings measured from the left side of adjacent walls.

Once the centers are marked, shift your tape so that the center of the rough opening is lined up with your mark and then proceed to mark either side of the door rough opening. This is the INSIDE edge of the trimmer studs.  Use your speed square to strike a line at this location over both plates and write the letter ‘T’ on both plates to identify the trimmers. Move your square over 1.5” and strike another line to locate the inside edge of the king stud. Mark the space outside of this line with an X or a K. Do this for all openings within the length of plate you are working with.

With your openings marked out, it’s time to layout the wall studs. Mark an X on the end of the partition wall where it meets the intersecting wall or otherwise terminates. This is the end stud for the wall, which if you are butting to an exterior wall, will be left off during the wall framing and installed after the bales are placed. It’s a safe bet that you will always have a stud located on the end of a plate, whether it be at an intersection of a perpendicular wall, a wall termination, or a joint in the plates. In a plate joint, the stud would not sit flush with the end of the plate. Instead, it would lie so that the current plate covers half of the stud and the continuing plate picks up the other half.

If you pull your tape from the end of the plates for your field studs and simply mark them at 24” (16” centers are typically not used for interior partition walls), you will discover during the installation of the drywall that you did something wrong. This is the most common mistake made during layout. The problem is that spacing studs 24” on center from the edge of the wall means that the edge of the studs throughout the field end on those 24” marks. What you want is for the center of those studs to be the 24” marks, thus the word “centers.”

There are several ways to override this mistake and get your layout right. The first, and the one I use most often because it is the fastest, is to pull the tape from the end and mark centers 3/4” back from the 24” line. For example, a 2’ location would be marked at 23 1/4” (not 24”) and a 4’ line would be marked at 47 1/4” (not 48”). This places the center of the stud on layout and means that all drywall will break on center. This provides adequate nailing for field sheets across the entire wall.

Pull the plates apart and remove the nails. You are now ready to install your studs and door rough frames (window frames would go in now as well if this were an exterior wall). You will need to cut your studs to a different length than your exterior posts because the top of the interior partition wall needs to line up with the top of the beam; however, you don’t have the depth of beam to work with, only the double top plate. This means that your interior wall studs will be longer than your exterior wall posts.

You will also need to cut specific pieces for the window (if this were an exterior wall) and door trimmers. They are also a different length as they stop at the bottom of the header (for partition walls) or the box beams (if exterior walls). I will cover the window and door framing specifically in the section on framing windows and doors.

Be sure to start your layout in the right place. Remember that the end of the primary top plate is not in line with the bottom plate. The bottom plate actually dictates where the partition wall begins since it is placed tight to the exterior wall’s interior edge.

If you find that some studs land within a few inches of the wall openings, you can eliminate them as long as they are not necessary for a drywall joint. In other words, if the stud were to be on the middle of any drywall sheets, you can eliminate it and let the drywall attach to the king studs instead.

Always, always, always write the layout on both plates. Without the marks on both the top and bottom plate, you won’t know where things go once you pull the plates apart and start your stud installation.

On an exterior wall where you have windows, be sure to continue the stud layout into the middle of the window. It’s easy to see a window opening and figure “I won’t have any studs there…it’s a window!”, but that would be incorrect. You still need studs above and below the window to a) provide nailing for the drywall and plywood and b) provide adequate structural support for the vertical loads in the wall. When you mark those studs, be sure to use the letter “C” for cripple. This means that the stud in that location does not connect to both plates and is instead interrupted by something, in this case a window frame.

Once again, there will be a lot more context for this chapter within the book, and I will also include more diagrams and photos to help clarify the details. I just wanted to give you a taste of what I’ve been working on. Believe me, it is chock full of details and will be an amazing asset to you when you start the construction of your project.