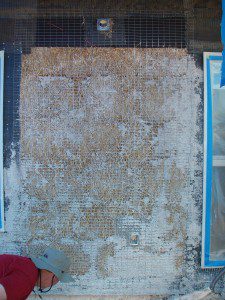 The sad and ugly aftermath of using the wrong plaster sand! In a recent workshop we discovered that the sand that was ordered for the plaster was not acceptable. I blame myself for this mistake as I did not catch the problem in time and allowed the plaster to be mixed. As is always the case, a mistake can be either just that: a bummer, or it can be a learning piece. What I learned in this scenario is the importance of finding the right sand for your plaster mix.

I spoke with the sand yard directly and told them what I needed. The dispatcher seemed to understand completely and the next day, 10 yards of angular, variable size sand was delivered to our very remote building site. There was no sending it back if we didn’t like it, it was what it was and it turned out to be the wrong stuff. The issue was that it had no fines in it.

The right sand for the Natural Hydraulic Lime (NHL) plaster needs a gradation of sand from the fines to the more coarse. No silts and clays mind you, but the finer end of the gradation is important.

You can see in the picture how the plaster simply did not hold together well. The lack of finer sand made the plaster loose and almost gravelly. I 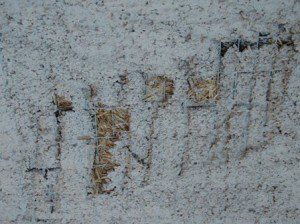 did a stretch test on the plaster by pulling a hawk’s worth of plaster across the table with a trowel. In quality plaster, the mud will spread and stay together, creating a smooth surface. In this case, however, the plaster ripped and tore as I pulled it on the mud board. There was nothing to hold it together.

We tried for an hour or so to get the mud to stick to the wall and eventually the sad truth became all too apparent: the plaster was not good. The worst part of the story is that we had premixed 18 bags of plaster the night before and all of it was wasted! The host now has a very fancy NHL carport floor! I ordered 18 replacement bags for the host and have informed him of the correct sand he’ll need, moving forward.

When you order your sand, be sure it meets the requirements on the NHL bag. Where I live the perfect sand is called “concrete sand.” It is angular, has many different grits (including the finer sands), and is perfect for the proper adhesion of the plaster. The same has been true across the country as I teach. The term “concrete sand” is almost always understood. In this part of New Mexico, that was not true. My plan moving forward is to send future workshop hosts a sample of the sand they should be looking for so they can make sure, well in advance, that they have the right stuff. 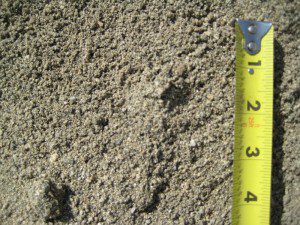 Per Martin’s request, here’s an image of the appropriate style of sand to use (size wise). I’ve also heard from an expert that using a lime based sand can cause problems too as the free lime in the sand will take up the moisture and leave the NHL without the ability to attach itself to the sand.