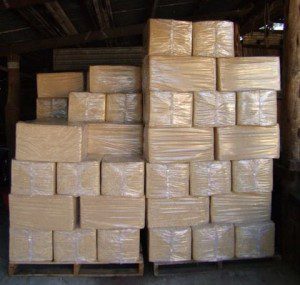 Several of you have, over the years, written to me about using plastic encased straw bales in the construction of a home. The suggested benefits of this have ranged from no need for additional vapor barrier, to ease of stacking, to being able to mortar the blocks together. Although this would seem like a good idea at initial glance, I don’t like the concept.

One of the most important aspects of straw bale construction is the ability for the walls to move moisture through them. I’m not talking about water, per se, but moisture in the form of vapor. The fact of the matter is that vapor will be present in your house and that moisture will find its way into your walls. What if you shower and forget to turn on the fan? Where does that moisture go? What if you forgot to turn the kitchen fan on while boiling a pot of spaghetti? That moisture has to go somewhere too.

Moisture collected or formed in the house (think about breathing house plants) will be pushed through the walls by the pressure of the home. Again, this is just reality: that homes are pressurized. Notice when you close an interior door that has a tight fit or when your bathroom fan turns on and slams your door the last 1/2″. That’s the pressure I’m talking about. If the bales are wrapped in plastic, there is no way for that moisture to get out. It WILL find its way through at whatever cost. That may mean finding a small penetration in the plastic and getting into the bales…only to find it can’t get out the other side. Now you have a plastic wrapped box of mush!

Another advantage of bale construction is the fantastic bond that is made between the plaster and the bales themselves. If the bales are wrapped in plastic, that bond cannot exist and so the overall wall assembly is weakened.  Not much more to say here. I think that’s pretty clear.

The advantages, or potential advantages of using plastic wrapped bales are far outweighed, in my opinion, by the risks that such a process would create. I suggest you stick with the bales in their natural state.

Andrew has a passion for straw bale construction that is matched only by his desire to teach his knowledge to others. He has a wealth of experience in designing and building conventional, tiny, and straw bale homes. After years of building, he has moved his practice entirely to consulting and teaching. He shares his knowledge with thousands of people via his DVD series, this website and the roughly six hands-on workshops he teaches each year.
View all posts by Andrew Morrison →
Ten Tough Questions Answered
Arizona Straw Bale Home For Sale (SOLD)