By Andrew Morrison in Contracting and Consulting, Electrical 0 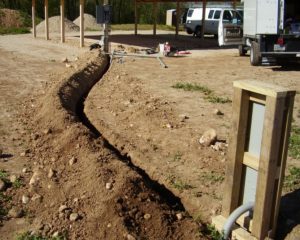 A house I am building is located on a rural lot that once held a mobile home. That mobile home had power and phone services to it; however, they were old and not suitable for the new, larger home. In addition, the underground pad mount vault for the power was located in the driveway of the new architectural design.

Obviously it would need to be moved. In general, phone and power are run in the same trench so digging up one without damaging the other is all but impossible, even with a great excavator. In this case, damaging the lines was not a big deal because the phone and power both needed to be upgraded.

Once the lines were powered down and exposed, they were cut and the new trench was dug. In this case, the power would be relocated first and the phone would be installed in a new trench after the power was turned on. The main priority is always to get power to the site as construction from a generator is expensive and slow.

The biggest thing to pay attention to in moving power and phone is scheduling. The power company and phone company may be as far out as 2 months for new service, so any delays on your part will have huge impacts on the overall timeline.

Be sure that you are FULLY ready for the service installs so the power and phone companies have no reason to leave the site and reschedule you. Be sure to install the individual items to the specified requirements of the power and phone companies. In other words, review the specifications for trench depth and width and pad mount size and locations.

Sharp scheduling between excavation subcontractors, power and phone companies, and your own crew will be vital to a successful job. Be sure to take pictures all the way along because you may get an inspector who says “go ahead and backfill” and another, two days later who says “I need to see the shading on this trench.”

If you have a picture, you can show the inspector the shading (sand on top of the conduit) without having to dig up the line at the risk of damaging your new installation. Remember, inspectors have the ability to ruin your day if they want to. Show them you are organized and want to work with them and they will help you along your journey.

Andrew has a passion for straw bale construction that is matched only by his desire to teach his knowledge to others. He has a wealth of experience in designing and building conventional, tiny, and straw bale homes. After years of building, he has moved his practice entirely to consulting and teaching. He shares his knowledge with thousands of people via his DVD series, this website and the roughly six hands-on workshops he teaches each year.
View all posts by Andrew Morrison →
The First Two Owners Have Officially Moved in to The Straw Bale Village
Fire Testing Straw Bale Wall Systems: They Pass!!