Want to speed up your post and beam framing? Here’s a great tip. This is something my crews figured out a couple years ago and I’ve been trying to find the best way to explain it: video, drawings, teaching people at workshops, etc. Finally, I’ve decided that I just need to write about it and give you a hand drawn sketch to get the ball rolling. I’ve been teaching it at workshops for years, but have not had time to make a video about it. So, here it is:

The concept is taken from conventional framing where the walls are built on the ground and then raised into position. One of the biggest problems with building post and beam houses is that all of the posts need to be plumbed and braced as they are installed and then checked again after the beams have been set. Once the beams are in place and the post are locked into position, the bracing can come off. That bracing, although used in other places on the job site, often gets broken or thrown away and that’s a big waste. So now, you’ve got wasted limber and slow going. Sounds like a poor way to start the job.

Here’s how our system works. Take a 2×4 and tack nail it to your bottom plate (in this case, your 4×4 which will be part of your toe ups). Complete the framing layout on the two pieces of lumber just as you would during conventional construction. In other words, mark the location of all the posts on both pieces of wood: the bottom plate and the top plate as shown in the image above.

Now separate the two plates and place them on the floor system (slab, framed floor, etc). Insert your posts per the layout and attach them to the plates. Now you can stand the wall in one long section (or several sections depending on the wall length). The key here is in the plumbing of the wall. Because your layout is exact on both plates, all you have to do is plumb the end of the wall and the entire wall ends up plumb for its length! That’s wicked fast! 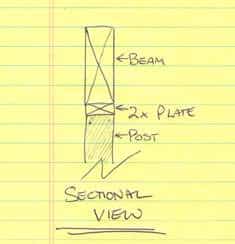 Now lay your beam on top of the 2×4 top plate and nail them together as shown in the sectional view. Be sure to avoid nailing in the middle of the “stud bays” as that’s where plumbers and electricians will want to drill their holes. Keeping the nails in a common pattern will allow them to avoid the nails and will help them keep their bits sharp. They’ll love you for it! Once the beams are in place, you can start to straighten the walls as necessary. The cool thing is that if your beams are straight, you won’t have much work to do in order to get the walls straight. Bonus! 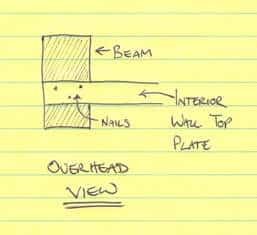 Install the interior walls and make sure that all of the walls are tied together by chiseling out a section of the beams (dado) the depth of the 2x interior top plate and then crossing your interior plates over the top of the dado. You can then nail down through the intersecting plate and voila, you are tied together and flush. See the overhead view here. 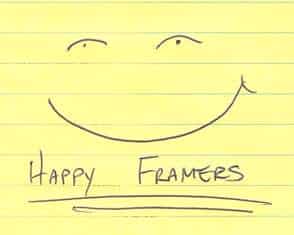 This system is far superior to any other framing system for post and beam I have seen or used. I think you’ll love it and your framers will too!

8 Responses to Speed Up Your Post and Beam Framing – StrawBale.com