Home made electrical spike for a straw bale wall

If you’ve ever made an electrical spike for your straw bale home, you know just how dangerous the process can be. At the seven day comprehensive workshop in Hurley, NY two participants and I created a set of jigs that make the process really safe and thus MUCH faster. I’d like to say thank you to Gerard and Mia for their help and input on the jigs. As a furniture maker and a metal artist, their input was vital to the success of these jigs.

I’d also like to thank Ian who took time over dinner to draw the jigs and a spike in Google Sketch Up so you can all benefit from the creation. He has created a file that you can view with the Sketch Up Viewer if you don’t have Google Sketch Up on your computer. HERE’S the link to get the viewer. If you want to download the entire Sketch Up Program for free, HERE’S the link to that. Ian has some cool websites that you might be interested in as well. I thought I’d give them a plug while I’m at it. Check out www.IGKEquestrian.com and www.NorthBrookFarms.com when you have a chance to see what he does. As I’ve mentioned before, this jig is a safe and fast way to make electrical spikes. Please take the time to review the drawings below and build the jigs for yourself if you plan to use spikes for your electrical installation.

There are several different ways to attach electrical boxes to a straw bale wall. One is to use electrical spikes made of wood that are driven into the bales and then secured with blood lath just prior to plastering. I’ve seen many different styles of spikes and most of them are not very good. Usually they are lopsided and unruly and so they don’t stay put in the wall or go in at an angle causing the electrical box to tilt away from the final position you would desire. The spikes I use are sharp and symmetrical so they drive perfectly into the bales and hold the boxes securely and straight. You can see what I mean in the pictures above. 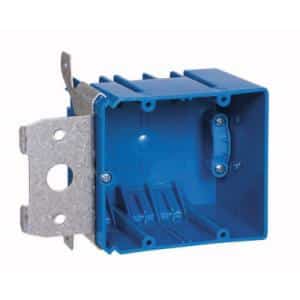 The spikes are attached to electrical boxes like the one shown here. These boxes are great because they have a strong point of attachment in the metal tab to the side of the box. Made to snap onto studs, the metal plate fits the end of the spike perfectly. A couple screws keep the snapped in place box permanently attached to the spike. What’s even cooler is that there is a small screw just along the side of the metal plate that adjusts the depth of the box relative to the plate. This means that you can adjust the depth of the box in the wall once the spike has been set. This is very helpful for the varying depth and thickness of plaster on straw bale walls. Note that the adjustment needs to take place before the plaster is applied.

Okay, so now for the jigs. Here are some photos of the site built jigs. The Sketch Up drawings are taken directly from these versions. IN reality, you can and should build yours out of whatever materials you have available that will make the jigs safe. That’s exactly what we did and so ours look like they were built from scrap material (because they were). 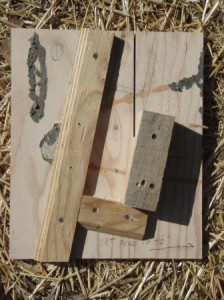 You may notice that some of the details of the jigs shown here are slightly different than the Sketch Up drawings. That’s because we improved the jigs as we used them. We added some additional blocks, for example, to make the jig safer. One of those blocks is to hold the spike in place during the cut while others were to make a bigger handle for the overall jig/sled to allow for easier movement through the cut. 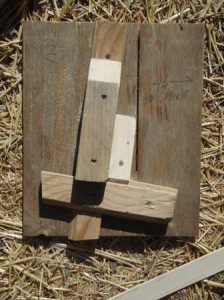 Note that on the second jig, there is a small piece of wood just in front of the handle and to the left of the cut line. This is a cut off from the first pass on jig #1 that is then shortened to provide positive support for the spike as it is sent through jig #2. The cut off is shown in the Sketch Up drawing as well. This piece is vital to the safe operation of the jig, so make sure you get it right. Without it, the spike is not supported as it passes through the blade on jig #2 which could cause the blade to throw the spike. Never a good thing, saw blade thrown wood, especially when it’s shaped like a vampire spike! There’s a video of one of the jigs in use by Gerard, one of the creators, on my blog about the New York Workshop. You can find that video by clicking here.

To build these jigs, you’ll need some dimensions. I’ve attached a Jpeg of the jigs from the Sketch Up file here; however, it’s hard to render this file into a 2-D image when you don’t have any skills with the program (that’s me) so I apologize if you can’t really make out the dimensions. If you’re interested in this document, please let me know by leaving a comment and I can email you the actual Sketch Up file and you can then view it in three dimensions and “walk around” the jigs yourself to get all the measurements you need.