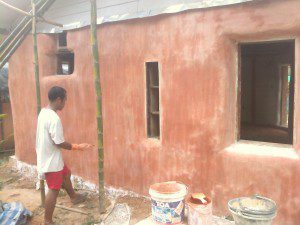 We have been curious about how straw bale construction in Thailand and other humid climates would fare. Gabriella recently connected with an American man living in Thailand who had built his own straw bale cottage. She asked him to share his story and he has accepted that request. Below, you can read how his interest in straw bale construction, which started some 20 years ago in Texas, finally came to fruition in Thailand. It’s a cool story. As you can see in the photos, this is a humid area of Thailand, so I’m excited to hear how the building fairs over the years with no special or mechanical dehumidifying additions. This will truly be a test of straw bale homes in humid climates. Here’s his story…

I first became aware of  building with straw bales about 20 years ago when a  house was built using them in Wimbereley, Texas.  The concept captured my imagination and stayed  with me over the years.  I now live outside Chiang Rai, Thailand with my wife and two children ages 12 and 31/2 yrs. It was during my first visit to Thailand in 2005 that my serious interest was rekindled.  I was working off and on in Iraq and during this time I researched straw bale construction via books and the internet. As Thailand is a large rice producer, with up to 2 crops per year here in the north, there was a lot of rice straw left standing in the fields after harvesting, either by hand or machine, and most of it was burned to clear the way for more planting.  I thought, why not use this neglected resource and build a small cottage.  I  chose to build on the land next to our existing house  and to make it small, approximately 550 sq. ft.

Of course the local village folks who knew of my plans were very polite not to be negative and some were even enthusiastic about my plans.  One man, nearby, a minor govt. official, even told me he grew up in a house with a clay render and he could remember that it seems cooler to him now.  Some local folks of course just chuckled, so to speak, and some were bemused I think.  They had never heard or seen a straw bale house.  Most built now are of cinder/concrete blocks, although the rich still prefer wooden structures in the older style.  Those are quite expensive.

Work began with the clearing of the land and foundation in 2008.  The foundation was cement with rebar, using 80X80X30 cm footing, 7.5 inch columns supporting a 40X25cm rim and then columns above the footings and linked to the rim to support the wooden rim joists and roof.  I then built the walls using bales of 90-110 cm long by 40cm x40 cm.  Shortly after finishing this phase the rainy season started and I was able to get one coat of render.  I experienced no problems with the rain as my roof overhangs are about 1 meter.

I had returned to work in Iraq until late 2009 and upon returning to Thailand I finished the exterior and interior rendering and other items.  The render is a clay, sand mix.  The clay sourced from the site, left over from foundation, septic tank dig, etc.  Sand was from about 5 miles away from a site on the river.  I did use some lime in some of the mix to experiment and also some bagged pottery clay from nearby.  I also used some burnt rice hulls in some of the mixes as well as using them to replace about 12% of the sand in the floor pour.

The inside isn’t finished yet, I would like to get some proper clay to use over the whitewashed walls on the interior.  I installed a hydronic type cooling system on some of the interior walls, consisting of plastic tubing which is then run outside to a meter and half deep well.  The system is a closed one and the water in the ground well will cool the tubing coiled in there through which the water in the tubing will circulate.  This should cool the thermal mass of those walls somewhat to help reduce the interior temps during our hot season.

The electrical is in yet not connected to the main supply as yet. Currently I’m working to develop some efficient way to use rice husks/hulls in the ceiling as insulation.  I have only about 5 inches of space to fill so they may not provide the total amount of R-value I would desire.  I would really like to use as many natural materials as possible so will see how this works out.  I haven’t settled on a finish for the ceiling, again would like to stay with a natural material if at all possible.

My bathroom and shower area will be of slate on the floor and walls.  The shower wall will be about 6ft. High with the slate and the rest of the bathroom walls about 4ft with the slate.  The walls will be about 7 ft. high to allow for moisture and air circulation and finished above the slate with lime and sand render.  The slate seems to be a very low embodied energy material and is available locally. 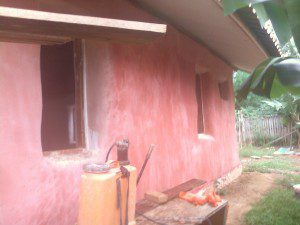 In March of last year a quite large earthquake centered north of us in Myanmar struck the region.  I felt it and the numerous aftershocks very strongly as I lay in bed in our original house.  The bed was shaking and walls moving, etc. for several seconds.  The aftershocks were strong at first and then tapered off of course.

Anyway, I immediately thought of the render on the straw bales and how it held up.  To my relief, as I checked the house the next morning, all I found were a few very fine, hair line cracks in the render.  These were easily repaired by an application of the lime wash I had used previously.  They are invisible now.

I would like to team with an organization to promote the use of straw bale construction here in Thailand.  There is a growing need to reduce the carbon produced by the use of cement and other  high energy embodied materials worldwide and with the abundance of rice straw in S.E. Asia this material could help to do this.

Things I would do differently: