We have all seen images of the massive fires in southern California. I would first like to send out my sympathy to anyone affected by the flames. I would also like to send out my respect and gratitude for the firefighters who risk their lives and give their all to defend the homes and lives of others. I have considered how to write about this topic over the last few days and I want to be clear that my intention is to support home owners in the affected areas, not judge them or tell them they have “done something wrong.” I want them to know that straw bale homes protect against fire where conventional homes fail. I have included a video at the end of this post which speaks to the fire wall testing data for straw bale walls.

Protecting against fires has long been important to code officials, builders, and home owners alike. None of us want to see our homes go up in flames. None of us want to experience the loss and the grief associated with that loss. Building codes exist to protect homeowners from fires: both minor and catastrophic. Even with those codes in place, we have seen that a well built house can burn to the ground in a matter of minutes. To me, the reason for this is obvious.

A conventional stick framed home is nothing more than a series of chimneys behind a thin layer of fire protection. What many homeowners don’t know is that the majority of the fire protection required by code in a conventional home is in the form of drywall. That’s it! 1/2″ of gypsum board is all that is required to protect you from fire. Once that drywall barrier has been compromised, there is nothing to stop the fire from attacking the structural wood and/or steel framing in your home. 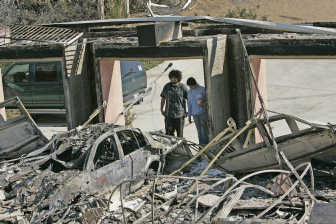 Straw bale homes are different. Straw bale houses are known for and have been tested to resist fire by up to three times that of conventional homes. Three times the protection may be the difference between a total loss and a miracle. The photo below shows how a home built of the right materials can survive even amongst completely destroyed homes built to conventional standards. I want to be clear that this photo is not of a straw bale home as I do not have a photo in my possession that shows what I am talking about; however, the data is the same.

A house built with bales has up to three times the fire resistance of a conventionally framed house. The house in the following photo does have one thing in common with straw bale homes: it is plastered. This is the first line of defense for straw bale homes. The 1- 1/4″ of plaster provides far superior resistance to flame than most sidings. Imagine trying to burn your way through that much plaster.

The second, and often most surprising element of straw bales that increases the fire resistance is the bales themselves. When most people think about straw and how it performs in fire, they think about barn fires, spontaneous combustion, and other fire stories. The fact of the matter is that barn fires are caused by hay that was baled too early with high levels of moisture still in the crop. The fires start when that moisture creates heat by decomposing the hay and then the hay flares from the heat of the decomposition inside the bale. Straw is baled when the crop is dead and dry, usually around 8% moisture content by volume, so no interior decomposition occurs.

Moreover, the bales are so tight, that most of the oxygen has been squeezed out of them. Fire cannot exist without oxygen, so once again the bales have created a form of protection against flame spread. Consider that a bale is like a phone book. If you rip out the pages one by one and light them on fire, they will burn: so will loose straw (although not very well due to the high silica content).

If you hold a lighter under the entire phone book, however, you will likely run out of fuel in the lighter before the book catches fire because there is no oxygen in between the pages to support the flame. The same is true for the baled straw. Now put the two systems together: thick plaster on both sides of the wall and dense, oxygen deprived bales inside. This combination makes for a very resistant wall and one which has a much better chance of survival in fire situations.

Protecting your home from fire in other ways is still important. Be sure to clear brush from around your house, clean out your gutters and under your decks, and so on. There are several sites which offer guidance on how to protect yourself from wildfires. If you live in a fire prone area, I strongly recommend that you complete the steps outlined on those sites.

The above video talks about some relatively recent fire testing on straw bale walls. The results of the testing were very positive and support everything that I have said about straw bale walls and their fire resistance. My want is for people who live in fire prone areas to start getting serious about protecting themselves from fire. Thousands of homes and buildings have been destroyed in the last two weeks by the wild fires in Southern California.

Most of the people who lost their homes will rebuild. I invite them to build with bales instead of building another conventional home. The benefits go beyond fire protection and reach into the world of green construction and healthy homes. But for this conversation, consider the difference between a total loss and a miracle the next time the fires comes blowing through…which they will!

Andrew has a passion for straw bale construction that is matched only by his desire to teach his knowledge to others. He has a wealth of experience in designing and building conventional, tiny, and straw bale homes. After years of building, he has moved his practice entirely to consulting and teaching. He shares his knowledge with thousands of people via his DVD series, this website and the roughly six hands-on workshops he teaches each year.
View all posts by Andrew Morrison →
Cash Back Grants for Straw Bale Homes in Missouri!
Straw Bale Houses, Not Hay Bale Homes: Why it Matters So Much