By Andrew Morrison in Construction Details, Tips and Trade Secrets 6 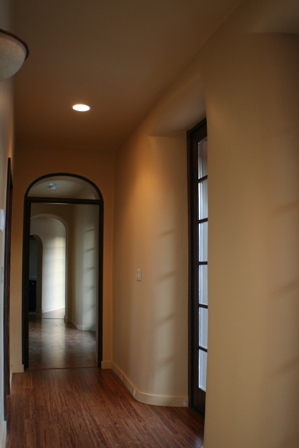 If you are building a straw bale addition as an infill structure, in other words with a frame other than the bales that will support the roof, then all you need do is attach the frame of the addition to the existing home where the two meet. That can be as simple as adding a stud in the corner at the transition and nailing it or lag screwing it into the existing frame.

In order to make the transition in exterior siding work, you will need to either plaster the entire run of the wall (if the addition joins the wall in a straight run), or add a trim piece that creates a clear line of separation for the joint. “If you can’t hide it, make it show.”

If you are building a load bearing straw bale wall as the new addition and there is no structural frame to attach to the existing building, then make the attachment at the toe ups and at the box beam on top of the wall as both of those items are necessary in the load bearing structure. In either case, load bearing or infill, be sure to extend your shear resistance onto the existing wall if the joint occurs in a straight run.

If it is located in the turn of a corner, then you do not need to wrap the shear transfer material as the corner will likely have shear resistance in it already. You may want to consult with an engineer to insure that your shear transfers and load transfers are adequate throughout the addition as well as at the union of the two structures.

Andrew has a passion for straw bale construction that is matched only by his desire to teach his knowledge to others. He has a wealth of experience in designing and building conventional, tiny, and straw bale homes. After years of building, he has moved his practice entirely to consulting and teaching. He shares his knowledge with thousands of people via his DVD series, this website and the roughly six hands-on workshops he teaches each year.
View all posts by Andrew Morrison →
A Loan Officer Offering Financing For Your Straw Bale Home
Dealing With the Top Bale Course