By Andrew Morrison in Construction Details 12 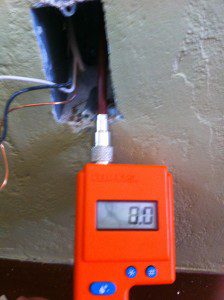 People often talk to me about testing the moisture content of the bales in their walls once their straw bale house is complete. For some it’s just a passing thought, but one they want to pursue. For others who are perhaps buying an existing straw bale home from a previous owner, it’s a must as they want to be sure the bale walls are dry. Whatever the reason, unless there are sensors built into the wall (which is rare) they need a way to access the bales without destroying the plaster.
The best way to accomplish this is to utilize the space behind the electrical boxes throughout the home. Because they are usually placed every 12′ or so along the base of the wall (plug locations) and at or near every door, both interior and exterior (light switches), they make the perfect access port for checking the condition of the bales.

What’s more, because many builders over the years have not done a good job of sealing up the electrical boxes, they are heavy indicators of moisture penetration into the bales. Warm, moist air is driven into the walls and takes the easiest path in. Since the plaster acts as a vapor seal over the vast majority of the wall surface, the penetrations in that seal (the electrical boxes), represent the path of least resistance. I suggest that people seal their electrical boxes in one of several ways. The easiest is to use vapor gaskets on every box. The cheapest way is to use spray foam in the back of the boxes. The spray foam obviously makes checking the bales at a later date harder, but it can still be done.

Here’s how to test your bales. Remove the box cover plates and pull the receptacle (switch or plug) out of the box. Use a screwdriver to pry the wire clamp or pinch strip (if present) out of the way and insert a moisture probe into the space at the back of the box. Insert the probe as far into the bales as you can. Getting the angle right may take a few tries. If there is spray foam present in the back of the box, dig a hole through it with your screwdriver and continue as above. Be sure to reseal the box when you are done.

This method works really well with the boxes we use in North America; however, I know that the boxes are different all over the world. For example, the boxes we used in the Portugal workshop could also work for this; however, they are much smaller than our boxes and so the proper angle for penetration of the bales may be hard to achieve. Give it a shot and see how it goes. It’s better than drilling holes in your walls!

12 Responses to Testing Moisture Levels in Your Straw Bale House