There is always a balance that needs to be struck between the desire to have an architecturally pleasing house and the impact of design details on the cost and difficulty of actually building that house. For most home owners, the desire to have something other than a rectangle as their forever home comes into play early in the design process followed swiftly by the reality check of finances. There is no question that the more elaborate your design, the more expensive it will be to build; however, there are ways to find that sought after balance that will please both your senses and your finances. 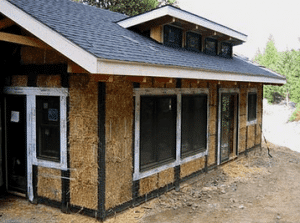 For starters, simple does not have to mean boring. There are many homes out there that utilize the basic rectangle shape yet manage to find inspiration in their design as well. It can be as simple as an interesting roof line such as the clearstory shown to the left, or some other simple yet clever deviation from what you might expect to see. For example, one could build two rectangles at a slight angle to each other to create a sense of curve. Even more elaborate, a long rectangle can be cut into two distinct sections of a home by dividing the spaces with a “drive through” for your car. The space above the driveway can be used as a breezeway to keep the home “in tact” while still visually dividing the space up. Further, that driveway through the middle of the home (sounds weird when I say it like that) provides a carport to allow you to unpack your car under cover. My point is that there are ways to add interest in even the most simple shapes.

Changing wall shapes is another way to add some interest to your design; however, keep in mind that with every corner you add to your house, you add cost. After all, you have to create that corner in the foundation, the walls, and the roof (to some extent). All of those areas of work require skilled labor and thus more cost. That said, it may be worth it to you to add some cost within the design elements so that your house speaks to you on a more personal level. You can always choose to put more money into the shape of the house and cut back on costs somewhere else.

A great example of this is some friends of ours who built the home of their dreams and then lived for several years with plywood cabinets and counters in their kitchen and bathrooms because they spent their money in the overall design and did not leave enough to finish the details (intentionally). They also lived with the exposed subfloor (painted a cool color) for those same years. Once they had saved up enough money to make the changes they wanted, they took action. The key here is that the design itself was not something they could easily change down the road, whereas the finish materials were. With patience and some pre planning, they got everything they wanted for their home, in time. 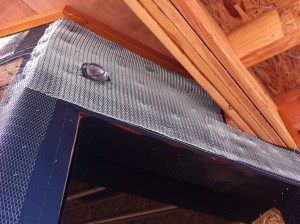 I’ve seen some cool design details go wrong in unexpected ways, so do your absolute best to picture the completion of the house before you finalize your plans. With the use of 3D computer modeling and even hand crafted models, you can really get a sense of things early on these days. A little extra money for the modeling may indeed save you thousands in labor down the road. The picture to the right is one example of a great idea on paper that caused some serious headaches in the construction process.

As you can see, the built-up beam intersects the wall at an angle and the space behind this intersection gets narrow quickly. As a result, there was no way to get the nail gun into the area closest to the intersection so the plaster lath had to be hand nailed (and very awkwardly at that!). It only got worse from there because plastering that area was not easily accomplished. With a plaster sprayer (and a skilled person running it) the plaster can be shot into position, but troweling that plaster smooth was hard. In fact, scratching it on the first coat, floating it on the second coat, and finishing it on the third and final coat was all made difficult by the beam intersection. A simple boxed soffit here would have made this entire process so much easier and the box would likely have taken less than five minutes to build in place. Hindsight is always pretty focused! 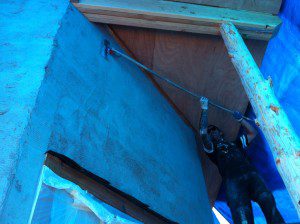 Here’s another example of a difficult design detail that added flavor to the house, but at more expense than necessary. As you can likely tell by the intersecting beam, this is the same house as the last photo. This picture is taken on the back of the home. The angles, once again, create a very interesting visual experience for the structure, but they make the finishing work harder.

In this case, the location of angled decks on the first level and the overall height of the walls made it difficult to reach the upper section during construction. There was no easy way to set up scaffolding, so much of the work was done from ladders, and in the case of this picture, with long handled tools that were fabricated on site to meet the needs of the crew. Had the design been ever so slightly different in regards to the shape and location of the decks, we would have been able to easily set up scaffolding and save ourselves a lot of time in the construction process.

In the end, this house was well worth the effort and it looks beautiful. The same can be said of many homes the world over; however, improving the design details in a way that would have allowed for the same beauty to shine through but with less stress along the way would have been even better. Take the time to really think about your design details while they are still on paper.

Walk through the construction process with your entire team during a round table meeting so that you can all share ideas about how to simplify things while maintaining the overall beauty and interest of the home. Many sets of eyes and many minds are better than one, so be willing to listen to your subcontractors and allow them to share their input. There is likely a gold mine of information that will help make your home more efficient, less expensive, and more enjoyable from start to finish. Keep in mind, that it’s always easier and less expensive to make changes on paper during the design phase of the project than it is to make those changes in reality to the house during construction.

6 Responses to The Impact of Design Details