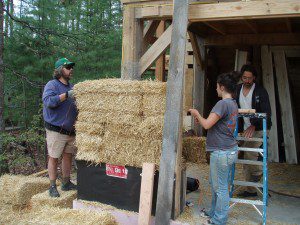 There are so many reasons why I suggest you not build your house with the straw bales on edge. It’s hard to know where to start. I’ll just lay out the first ten that come to mind.

1. Strings on the exposed face mean no notching around posts and thus a thermal break at each post.

3. Any framing in the wall eliminates the running bond system, thus weakening the walls.

4. No weedwacking is possible to smooth the walls.

5. Running electrical is difficult because you have to cut chainsaw grooves around strings.

6. Corners are unsupported because you can’t notch the bales around the posts, therefore there is no overlap.

7. Niche construction means cutting the strings and weakening the wall.

8. The shape of the bales requires more stuffing when on edge.

9. The exposed surface of the bale has less “tooth” for plaster than when the bales are stacked on the flat.

10. Wall settling may be more as the strength of the straw bale is not from side to side but from top to bottom.

Having worked with bales on edge on several occasions, I’m certain that I won’t do it again (if I have control of the project). The only reason I’ve heard as to why people think it’s a good idea and continue to do it is that it saves square footage because the bales are thinner in the walls this way. Let’s be realistic, you only save 4″ per wall and that’s not worth it in my opinion.

If you plan to build with bales, you need to know that your walls will be thick. If that’s a problem for you, there are other building systems out there to consider or you can use a portable sawmill to rip your bales down by 4″ and then use them on the flat. That’s not ideal, but better than stacking on edge. I’ll write more about that process later.