By Andrew Morrison in Construction Details, Tips and Trade Secrets 2 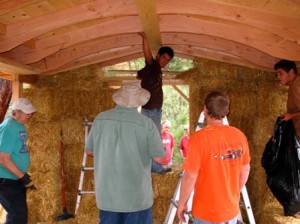 It is likely that the bales will not fit perfectly into the wall assembly no matter how it is framed. This is simply part of the reality of construction. Even the best intentions of design can go astray in the field. If framed properly, a 9’eiling will provide a perfect fit for bales (of the right size) stacked tight to the floor/ceiling joists. For a 10′ ceiling I have found that turning the last course of bales on edge often creates a tight fit for the wall. The problem with this is the twine which ends up in the face of the bales. To plan ahead, I retie the bales so that when turned on edge the twine will not be on the face of the wall. This allows me to weed whack the bales as needed.

The cool thing about this system is that if the floor/ceiling joists are on top of the beams, the width of the bales turned on edge and placed against a 4x beam is almost exactly the same as the width of a bale laying flat and notched into the frame. So, it not only speeds up the stacking and strengthens the wall, but also fits perfectly! A little stuffing from the outside during meshing is all that is required. On a 9′ 6″ ceiling, you may need to simply add some flakes and stuff the top of the wall. This does not provide as strong a connection for the bales, so you may want to anchor the bales with a 2×4 between the frame as described in an earlier post.

Andrew has a passion for straw bale construction that is matched only by his desire to teach his knowledge to others. He has a wealth of experience in designing and building conventional, tiny, and straw bale homes. After years of building, he has moved his practice entirely to consulting and teaching. He shares his knowledge with thousands of people via his DVD series, this website and the roughly six hands-on workshops he teaches each year.
View all posts by Andrew Morrison →
Connecting a Straw Bale Addition to an Existing House
Fireplaces in Bale Walls

2 Responses to Dealing With the Top Bale Course