By Andrew Morrison in Construction Details, Framing, Videos and Podcasts 99 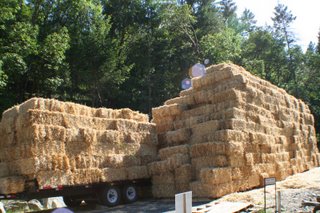 I recently received the following question from a visitor to my blog named Pat. I get questions on using straw bales to insulate a house quite often. Here is what Pat wrote:

I have a house built in 1911, the wood frame is 2×10 and 2×4 pine construction the wood is now so strong that a nail must have a pilot hole drilled first. Is it possible to add additions to this house using straw bale construction and tie the two together somehow? I live in Minnesota so I love the high R value of bale construction. I had also thought about completely encompassing the whole house and slowly removing the exterior of the existing house. The purpose would be to allow us to live here while we are building the additions. If you have done this how did or would you do it?

Here’s my answer
The idea of wrapping the house in bales is a common one and sounds like it would be a good idea in Pat’s climate. I have attached a video below that discusses three of the major areas of concern when working with wrapping an existing house with bales.

When attaching a straw bale addition to an existing house, the biggest concern is to make sure that the two structures are tied together well. The easiest way to do this is with expanded metal lath at each course. Lay a swath of lath on top of the bales and pin it to the top of the bale surface with dowels or landscape pins, the latter being easier. Then bend the lath up at a 90 degree angle and staple it to the framing of the existing house.

The two structures are now tied together. Be sure to use lath spanning the face of the joint created between the bales and the existing structure before you plaster because the two building materials will move at different rates under different weather conditions.

Finally, make sure the face of the bales and the face of the existing walls are lined up properly “in plane” so that the finish plaster will not have a bump in the transition. The exact line up depends on the thickness of the plaster on the two substrates and the transition used. Just be aware that some thought will need to go into this before you even form the new foundation. Happy Baling!

Andrew has a passion for straw bale construction that is matched only by his desire to teach his knowledge to others. He has a wealth of experience in designing and building conventional, tiny, and straw bale homes. After years of building, he has moved his practice entirely to consulting and teaching. He shares his knowledge with thousands of people via his DVD series, this website and the roughly six hands-on workshops he teaches each year.
View all posts by Andrew Morrison →
A Concern with Painting Plastered Walls in a Straw Bale House
Evaluating the Building Site for a Straw Bale House

99 Responses to Retrofit: Using Straw Bales to Insulate a House