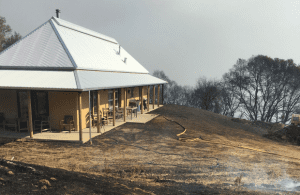 This straw bale home in the Redwood Valley stood its ground against massive wildfires.

The recent wildfires in California have created massive devastation across the state; however, they have also given us an opportunity to see, first hand, just how well straw bale structures perform in wildfires. David Arkin of Arkin-Tilt Architects recently released a report through the California Straw Building Association (CASBA), that documents the performance of four straw bale homes. Although sad to see, the evidence provided in this report is invaluable.

As a long time straw bale builder, teacher, and advocate, I have always touted the performance of straw bale structures in wildfires, as have many other advocates from architects and engineers to builders and home owners alike. Even with this flow of positive reinforcement regarding their performance and resistance to flame spread, some building officials have wanted to see more “concrete” proof of that performance.

Let’s go back in time a bit to gain some perspective on what’s been accomplished regarding the effort to prove the fire resistance of straw bale structures. In July of 2006, the Ecological Building Network created the “straw bale fire test program” and tested a series of wall assemblies at Intertek Testing Services in San Antonio, Texas. In that process, they were able to show that a bale wall assembly is capable of passing ASTM standards for a rated, two-hour fire wall. That’s far superior to conventional wall ratings, which typically come in around 20 minutes. You can watch a video about the testing process and the results below. This was an important step in solidifying the data we needed to prove to building officials that straw bale wall assemblies are in fact excellent at resisting flame spread.

The wildfires in California have given us the anecdotal data to go along with the empirical data of the ASTM testing. The CASBA report documents four case studies of straw bale homes with photographic evidence, owner input, and architect site visits. There’s no doubt that the fires damaged the buildings, in some cases with devastating results; however, even the home that was destroyed shows strong evidence that the straw walls performed far better than the conventionally stick-framed sections. You can read the report here and see for yourself just how impressive straw bale homes are in regards to resisting flame spread.

I’d like to thank David Arkin and the folks at CASBA for creating these case studies. By the way, if you’re not already a CASBA member, please consider becoming one today by clicking here. I’d also like to thank the owners of the homes who have openly shared their experiences so that we can all learn and benefit from them. Keep in mind that these homeowners have just weathered massive wildfires and, in one case, lost their beautiful straw bale structure. Their decision to share their stories with us is no less than gracious, so please join me in sending a heartfelt thank you to them as well.