By Andrew Morrison in Helping Each Other/Personal Stories 6 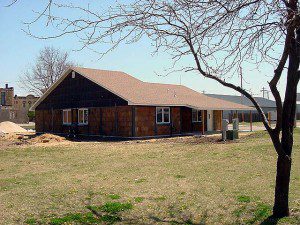 Newly elected Mayor David Criswell of Wilson, Kansas (population 781) is not your typical mayor.  In fact, no other mayor in the US likely includes ‘straw bale builder’ on their job resume.  I recently had the distinct pleasure of catching up with him on the phone and while we spoke it quickly became clear to me that David is a man of enormous heart, kindness, and courage.

Fueled by a passion for creating low income housing for seniors that is safe, healthy, dignified and energy efficient, he saw straw bale construction as an obvious fit.  The end result was a six unit, low-income, senior housing development constructed with straw bales and funded in large part by the Federal Low Income Housing Tax Credit (LIHTC).

Mayor Criswell’s journey with straw bale construction began after he picked up a copy of The Straw Bale House nearly 12 years ago.  Curiosity piqued, he and his wife, Kim, went on an outing to Nebraska to tour two historic bale homes built in the 1920s.  The Mayor recounts that the wind had been howling that day, ripping loudly through the landscape.  As they entered one of the straw bale homes and closed the door, to their absolute amazement they found themselves in peaceful silence.

Just to confirm, they peered out the window and noticed that the wind was indeed still bending everything in it’s path.  He shares that the experience he and Kim had in the straw bale historic home was, “Unlike anything we’d ever felt before in a house.”  He remembers that “Inside, it was so peaceful and quiet.”

From that point on, Mayor Criswell was sold on the idea of straw bale construction and began to intensely study the construction method, reading everything and watching every video available on the topic.  It became obvious to him that this technology would be the perfect solution for fulfilling a dream of his:  to build energy efficient, inexpensive to run, and tornado safe housing for low-income seniors in Wilson.

Undeterred by his lack of significant building and contracting experience (he was a County Administrator at the time, not a builder), David Criswell decided to apply for the highly competitive Low Income Housing Tax Credit to help fund the project.  Keep in mind that this was the year 2000 and straw bale construction was not nearly as popular as it is today.  The application process for the tax credit is grueling and time intensive to begin with, so throw in that David needed to educate the federal, state and local governments about straw bale construction and one gets a sense of the breadth of his passion and conviction. 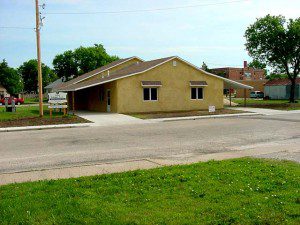 David worked tirelessly at the local level to gain the approval letters required to complete the application process.  He went from the Fire Department, to the City Council, to the Senior Center giving presentations, showing videos and giving out multiple copies of straw bale books.  In the end, he was able to send 15 letters of approval from major local organizations with his application.

Several months later, to his complete surprise, a letter of approval from the review board arrived and the Czech Cottages senior low-income housing center was born.

David and two other locals spent the next three years, working tirelessly to build the 6 units that comprise Czech Cottages.  David himself did the baling work on the modified post and beam homes while the others took care of the other building aspects.  He describes humorously that during the baling portion of the build hundreds of people drove by the job site and stopped, mouths agape. “People had never seen anything like that before” he shares.  Still, locals were more curious than anything else and in time, he and two others became affectionately known as “The Three Little Pigs”.  They had gained the support and approval of the community.

Countless hours of effort paid off and today the seniors living in the 6 units  are thrilled.  Mayor Criswell shares that those residents really are the best promoters of straw bale construction because they love living in their homes.  After the initial move-in by the new residents, it became a ritual for them to meet up at the senior center armed with their utility bills for a utility cost ‘show-down’ so to speak.

Seniors in conventional homes were paying around $200 per month whereas the ones in Czech Cottages had to pay out just $20 for that same time period.  In the Mayor’s view, a home is only deserving of the title ‘affordable housing’ if it doesn’t have huge monthly utility bills.  He makes a very good point.

Turnover has been extremely low and there is quite a long waiting list of seniors hoping to live in Czech Cottages and for good reason.  They are not only very inexpensive to run, but are also intentionally located right across the street from the Senior Center.  Other conveniences such as the Library, Post Office, supermarket, and doctor are all within easy walking distance as well.  Further, each home contains a “Safe Room”, which is a FEMA approved tornado emergency shelter.  So, in case of a tornado warning, the seniors don’t need to risk leaving their homes to find shelter elsewhere.

What now for Wilson, Kansas (recently voted by Bloomberg.com the #1 place in Kansas to Raise a Family) you may wonder?  With his new title, Mayor Criswell plans on creating business, job, and housing expansion for this small close-knit community.  He fears that without some real changes and planning that the town will essentially die off.

Fortunately for Wilson and its’ good people, Mayor Criswell is not afraid of being a visionary, putting himself out there and doing the hard work.   He says, “We’ve got to be open minded to doing things differently if we’re going to survive the long term”.  If anyone can be open minded and think ahead of the curve, it is Mayor Criswell.

I quietly reflected after my conversation with the Mayor that there are some common qualities we all seem to share as straw bale enthusiasts: a willingness to do things differently than others, to take risks, to experiment, and to believe that we actually do have the ability to create positive change.  Each time one of us takes action to create the change we want to see in the world, we lessen the challenges for the next person.  So rise to the challenge. Be bold and create something amazing in your neighborhood.

Andrew has a passion for straw bale construction that is matched only by his desire to teach his knowledge to others. He has a wealth of experience in designing and building conventional, tiny, and straw bale homes. After years of building, he has moved his practice entirely to consulting and teaching. He shares his knowledge with thousands of people via his DVD series, this website and the roughly six hands-on workshops he teaches each year.
View all posts by Andrew Morrison →
Canadian Farmers Challenge Monsanto
Timber Frame and Straw Bale

6 Responses to The Straw Bale Mayor