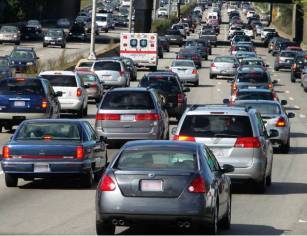 Many of you have written to me in recent months asking about straw bales as soundproofing options against noisy streets and neighborhoods. I have responded to a lot of you individually, but figure it’s better to give everyone this information as well.

I have to start with a funny story. Last night, as I was trying to go to sleep, the outside gate was swinging and banging in the wind. The gate is attached directly to the side of the house we’re currently renting (no, it’s NOT straw bale, and thus the funny story). My wife was still awake and so I asked her if she could go outside and close the gate. She did and when she got there, I could hear she was having trouble getting it to latch. Without leaving my bed I said, “you have to lift the gate up and push it towards the house while you latch it.” She thanked me for the input, latched the gate and came inside. We both laughed when we realized we had just had a clear conversation, with no difficulty hearing each other, right through the wall of our house!

What a sorry state of affairs it is when we can actually talk through our walls. The walls are insulated, by the way, but even still, they are easy to talk through. That would never happen in a straw bale house, I guarantee it! In fact, when my crew would work on straighten walls, after they were all stacked, they would often use walkie talkies to communicate with the person on the other side of the wall. Without those, they would have to walk over to a window opening and reach their heads out to communicate with each other.

So the answer to the question is yes. Yes, straw bale buildings are incredible insulators from sound. If you live on a very loud street or perhaps you back to an interstate, these walls will eliminate almost all of the noise that you currently live with. You can build a straw bale house or consider building a straw bale landscape wall. Although not as good as an entire house of straw, they still work really well to eliminate sound.

The science is in the density. Sound travels as waves. When it moves through hard material, it travels in fast, short waves. When it travels in soft material, the wavelength increases and slows down. Now look at a straw bale wall. The outer plaster skin is hard and dense and so the sound waves move through it at high speeds; however, when they hit the bales, the sound waves slow down. The key here is the interior plaster. In order for the sound waves to escape the soft bales, they would have to accelerate to get into the hard plaster skin. They can’t do that and so end up absorbed in the bales. Voila, noise suppression 101 and straw bales as soundproofing options work so well!

Andrew has a passion for straw bale construction that is matched only by his desire to teach his knowledge to others. He has a wealth of experience in designing and building conventional, tiny, and straw bale homes. After years of building, he has moved his practice entirely to consulting and teaching. He shares his knowledge with thousands of people via his DVD series, this website and the roughly six hands-on workshops he teaches each year.
View all posts by Andrew Morrison →
Baling in Wet Weather: Mitigating Inclement Weather on the Job Site
-SOLD- Gracious Country Straw Bale Home & Big Adobe Studio in Sunny Southern Oregon

39 Responses to Keeping Noise at Bay: Straw Bales As Soundproofing