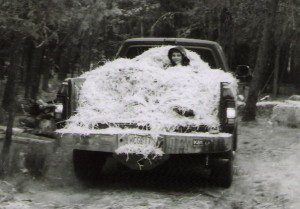 A question that I’ve been asked potentially thousands of times over the years teaching workshops is “can I stuff the wall with this?”. I like that people ask the question, actually, because it shows me that they are paying attention to the details and wanting to make the house the best it can be. The answer is usually “yes” but has been “no” a few times.

When it comes to stuffing loose straw in the wall, one might think it’s easy: just grab whatever loose straw is around you and shove it into the hole that needs to be filled. Well, nope. Like so many things in life it’s a little more detailed than how it first appears.

The first thing to keep in mind is that you want to use long straw, not short and stubby pieces. Certainly do not use material that has been cut from the wall either by a chainsaw or weed whacker. That straw is way too short and will not create a solid patch.

Second, be sure to twist the straw into a rope. In fact, I prefer to twist the straw into a rope and then fold that rope in half before I place it in the wall. This helps tie it all together and keep it tight in the gap it’s filling. Spaces that can’t be filled in this way because they are too small can be filled with looser straw packed in tight around these ropes. Be sure to use long straw!

A third detail is when to use a clay slip. Most gaps can be stuffed with dry straw as long as it is well packed as described above. Some bigger holes may require a clay slip to be applied to the patch straw to help it stick, literally, in place. The slip also cuts down on potential burning of the patch should a fire spread across the wall. Of course, that’s a bummer no matter what, but it’s still important to build to the best standards you can.

Once thing to keep in mind is that stuffing the gaps between the bales, if any, is easiest done while stacking the bales. Stuff some material as described above in between the bales and pack it in tight. This keeps the stuffing in place when weed whacking and helps to tighten up the wall as you build. Waiting until after the walls are up makes the stuffing process slower and more labor intensive overall.

2 Responses to Can I Stuff the Wall With This?