Concrete stakes are essential to just about any foundation project. In fact, they are used on almost all concrete projects that a home owner is likely to encounter. If you recognize the stakes in the image above, then you must have used them before. If you don’t know what they are, allow me to explain.

Concrete stakes are used to hold the concrete form boards in place prior to and during a concrete pour. They stay in place until the concrete has hardened enough to remove the forms. At about $5 each, they are not cheap, and an average home foundation can easily use 200 or more of them. Making sure that you are able to get each one out after the pour is well worth the effort, but does not always happen.

If you wonder why the stakes would get left behind, check out the photo below. The way the stakes are installed, they will end up exposed to the concrete when it is poured even though they are placed on the outside of the form. The concrete will flow out from under the form boards and around the stakes and if they are not removed before the concrete hardens, they will become a permanent member of the foundation. The picture below is a bit of an extreme situation as the forms are usually cut more tightly to the ground; however, even a little space for the concrete to flow around the stakes can cause them to stick, forever. 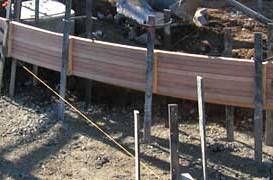 So how do you stop concrete from flowing out from even the smallest holes in the forms? You can waste your time trying to stop it at every little opening as you pour, but you will likely end up losing the battle and also missing the finishing time window for your pour. I have a better way: foam pipe insulation.

This material is designed to go around plumbing lines and it works just as well around concrete stakes. It can be cut with a razor knife and placed in seconds. I cut it tight to the bottom of the form and to the ground. It does not matter how much concrete spills around it as the foam can stay in place (on the outside of the form boards), and I can still pull my stakes out from inside the foam. The image below shows an example of where I needed to support a form board that would float over a widened footing. I had to stake the form board in place, but that meant having a stake right in the middle of the footing.

With the scrap foam, I isolated the stake from the footing and still supported the form board. When the pour was complete, I allowed the concrete to harden and then pulled the stake, leaving a small piece of foam in the footer. This foam was tiny compared to the oversize footer and so the strength of that footer was not compromised. Without the $0.99 worth of foam, I would have sacrificed a $6 stake. 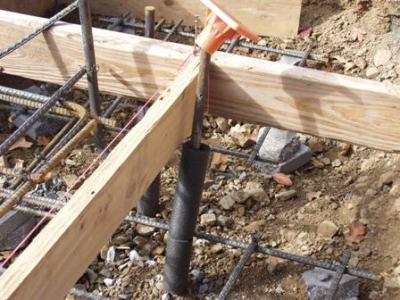 No matter what the job, from a small pad to a sidewalk or a house foundation, there is no reason not to take the extra time to protect your stakes from over poured concrete. The tip above is quick, easy, and inexpensive. In all, it is well worth the effort.

Andrew has a passion for straw bale construction that is matched only by his desire to teach his knowledge to others. He has a wealth of experience in designing and building conventional, tiny, and straw bale homes. After years of building, he has moved his practice entirely to consulting and teaching. He shares his knowledge with thousands of people via his DVD series, this website and the roughly six hands-on workshops he teaches each year.
View all posts by Andrew Morrison →
Protecting Your Straw Bale Home from Weather – StrawBale.com
Anchor Bolts for Toe Ups in Straw Bale Construction

8 Responses to Saving Concrete Stakes From Your Foundation Pour