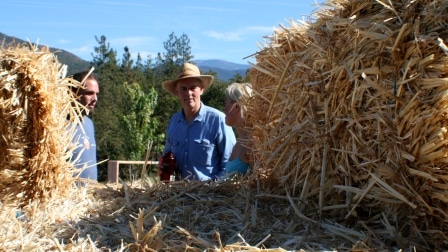 Here’s an interesting question I received today about straw bale load bearing wall heights.  I hope to hear more about this idea of multi-story load bearing structures in the future.  Perhaps you have some input to share…

Although you said that you could not have a 2 storey LB building  because of the wall thickness/height ratio – could it not be done with a box beam between the floors with a second beam beneath the roof. Surely this would then start the ratio again? From other straw bale builders I gather that the bales would support the weight and therefore with an interim box beam this has to give it sufficient strength?

Here’s what I said in response (with a little expansion): 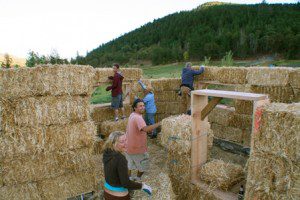 I would see how this could work. It seems to make sense; however, the biggest issue I hear from engineers is that the overall weight of the walls is still transferred to the foundation in a direct load path and thus the wall height ratio cannot be started over. The middle box beam could ultimately become a hinge point for the wall if under large “out of plane” loads.

In general it’s dangerous to have a lot of weight up high in a wall system or building because the tendency is for that wall to rack and/or tip over if under loads such as wind or earthquakes. That’s why in post and beam structures, and all conventional construction structures for that matter, there is a specific lateral bracing requirement that must be met as well as an “out of plane” resistance requirement. With so much weight in the walls there could be a risk of such a collapse.

I’ve heard of three story load bearing structures in Canada that were engineered and built relatively recently; however, I don’t think they have been up long enough and seen enough of nature’s forces to give us adequate information as to the long term viability of such a building. I’m eager to watch the time pass on those buildings and see how they fare. I think it really could be a major improvement to the load bearing construction world if these structures prove reliable and safe over the long haul.  I’m hopeful they will.

Andrew has a passion for straw bale construction that is matched only by his desire to teach his knowledge to others. He has a wealth of experience in designing and building conventional, tiny, and straw bale homes. After years of building, he has moved his practice entirely to consulting and teaching. He shares his knowledge with thousands of people via his DVD series, this website and the roughly six hands-on workshops he teaches each year.
View all posts by Andrew Morrison →
Masonite Announces Wheat Straw Solid Core Doors
A Straw Bale Guest Chalet Vacation in South Okanagan, BC