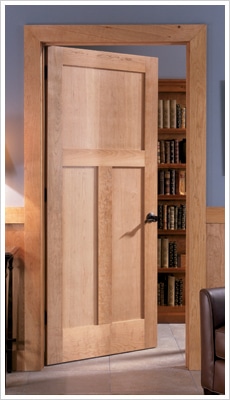 This is pretty cool: new interior doors made from wheat straw. And they’re solid core! With other straw products on the market for some time now, I’m happy to see that some of the larger, more mainstream companies are picking up the ball. I hope they run with it and run the right way. The new doors were officially announced on Masonite’s website in February.

Masonite has released two wheat straw door lines: Safe ‘N Sound and Safe ‘N Sound Emerald. The Emerald door is certified by the Forest Stewardship Council (FSC) and helps owners attain other certifications such as those considered under the USGBC Leadership in Energy and Environmental Design (LEED) standards and the NAHB Green Home Building Guidelines. It is built without any added urea-formaldehyde.

The standard Safe ‘N Sound door is less impressive with it’s Green attributes, but does at least have some merits in it’s use of a wheat straw base called DoorCor, as well as the use of post-industrial recycled materials, and low formaldehyde emissions.

There is not any information, in terms of pictures and pricing, on the website yet about these doors. Because the announcement is still very young, I imagine the flow of these doors into retailers may be slow at first. I hope that the price is right on these doors, making them a good option for lots of people. Increased demand of such items will ultimately increase their production.

How many of you remember when CD players first came out? They were expensive and pretty basic. Now look at what most CD players cost. In fact, the market is moving through and away from CD players as “something better” has come along. The point is, it was the demand for CD players that expanded the industry and ultimately created a new one. This is how I think the green movement needs to expand.

I’m hopeful that this product catches on and continues to advance the improvements of Green and healthy home construction for the masses, not just for those of us who are willing to look a little harder to find “the right stuff” to build with.

Andrew has a passion for straw bale construction that is matched only by his desire to teach his knowledge to others. He has a wealth of experience in designing and building conventional, tiny, and straw bale homes. After years of building, he has moved his practice entirely to consulting and teaching. He shares his knowledge with thousands of people via his DVD series, this website and the roughly six hands-on workshops he teaches each year.
View all posts by Andrew Morrison →
Money Saving Strategies for Straw Bale Construction
Straw Bale Load Bearing Wall Heights – StrawBale.com