By Andrew Morrison in Green Building/Living 2 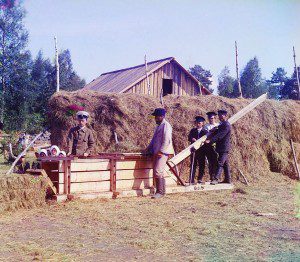 Imagine if we had to make our straw bales with an old school hand baler like this one from 1916. That would certainly slow down the process of building a straw bale house. I guess it’s fair to say that it’s green construction because there are no emissions, unless of course you consider sweat to be an emission! As if the work isn’t hard enough as is, let’s make the men wear heavy wool clothing to sweeten the smell!

Seriously though, the fact that hand balers can be used to make quality bales is actually important. There are parts of the world where building a straw bale home would be fantastic; however, the machinery does not exist in the area to do so. That’s where the hand balers come in. There are parts of Africa, for example, where the labor rates are very low (in relation to what we are used to paying here in the States) and large labor forces exist. If one could employ those laborers to make bales, stack them, and create beautiful and efficient homes from them, a whole new perspective on housing could be created.

The efficiency of straw bale homes would be a wonderful thing to share with those living in extreme climates and the existence, or lack there of, of local modern baling machinery should not deter people from making this happen.