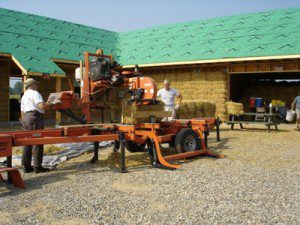 Why would I want to do that? You may be asking yourself that very question and rightfully so. The answer may be simple or complicated depending on the situation. It may be that you have a series of wall sections that need thinner bales than the rest of the house due to framing and engineering requirements.

In some scenarios, you can simply turn a bale on edge and it will fit perfectly. In others, you can’t. I’m not a huge fan of using lots of loose stuffing in the house to fill larger voids like this. I think that starts to weaken the wall in the end. In fact, the tight fit of the bales to the top plate is one of the ingredients for a tight and solid wall. By cutting down regular bales by the required 4″ (in the scenario described above) you can install regular bales, stay with the running bond pattern, and install them tight to the top plate. Only minimal stuffing will be required.

Here’s another scenario that a friend of mine just experienced. Because of his location, he had to have his bales trucked in from another state. That’s not ideal, as I prefer to purchase bales locally, but he wasn’t able to do that due to current local straw stocks. Having installed his toe ups, and framed the house, he was ready for his bale delivery and it showed up right on schedule. Only one problem…the farmer sent him three string bales, not the two stringers he had ordered. The three string bales were 6″ too wide for the house he had built. He thought about stacking them on edge and I was able to talk him out of that. When he asked me for suggestions of what to do, I contacted a friend of mine with a portable sawmill. Here’s a scenario where he had to trim 6″ off of 400 bales and do it quickly. Every day that he didn’t have bales to install, the job was falling behind schedule. 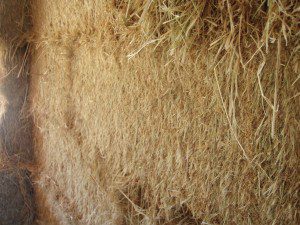 So with two laborers and one sawmill expert, the entire stack of 400 bales was cut down by 6″ in a little less than 6 hours. If you’ve taken a workshop with me, watched my DVDs or just paid close attention to bales in the field, you’ll already know that a standard straw bale has two edges: a folded edge and a cut edge. That’s due to the way a baling machine works, folding the straw into the chute with a plunger, tying the bale and then slicing off one edge to make the bale the right size.

I always recommend that the bales be stacked all the same direction in the walls, cut side in or cut side out. There are some factors that do into deciding which way to face the bales, but that’s not the point of this story. In this scenario, the “new” cut edge was extremely clean and sharp. It made for the perfect interior wall surface as finalizing the wall clean up will be easy with the pre-cut bales all facing the same way. You can see in the picture here how nice the bales turned out and why they create a clean surface for the interior wall.

Although I really don’t recommend planning on the use of a portable sawmill unless entirely necessary, it’s good to know that they work so well and so quickly should you find yourself in a similar situation. The best remedy for this problem is proper planning and proper communication. Mistakes get made, it’s part of life, and so having a back up plan to great planning and communication is a good thing.

Andrew has a passion for straw bale construction that is matched only by his desire to teach his knowledge to others. He has a wealth of experience in designing and building conventional, tiny, and straw bale homes. After years of building, he has moved his practice entirely to consulting and teaching. He shares his knowledge with thousands of people via his DVD series, this website and the roughly six hands-on workshops he teaches each year.
View all posts by Andrew Morrison →
10 Reasons to Never Stack Your Bales on Edge
Speaking at the San Jose Convention Center This June

3 Responses to Resizing Straw Bales with a Portable Sawmill