By Andrew Morrison in Design/Engineering, Green Building/Living, Helping Each Other/Personal Stories 1
Here’s an interview with the architect of a straw bale cafe in the United Kingdom. This modern and elegant building is not something easily or immediately identifiable as straw bale. That’s part of what makes it so interesting to me. I love the modern lines and clean design. The execution of the construction was done extremely well too, so the entire build from start to finish is inspiring. I hope you enjoy the interview…and the straw bale cafe itself! 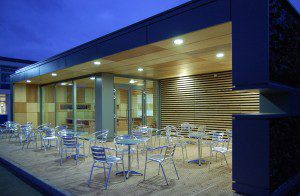 I’m Paul Younger, an architect and associate with Hewitt Studios LLP in the UK. Our practice focuses on high-quality, non-traditional sustainable design – just because its green, doesn’t mean it has to be twee or old-fashioned!

2. How did you get involved with the Straw Bale Cafe?  Had you built with straw bales before?

Our practice approached by Herefordshire College of Technology to extend and refurbish the refectory facilities on their Holme Lacy agricultural campus to create a 100 seat student cafe.  In visiting the site and talking to the users, two things struck us: The first was the abundance of natural resources that the campus possessed (it is effectively a training farm, set in acres of fields and woodland), the second was the enthusiasm of the College staff and students to get involved.  It was agreed that, rather than just build an ‘extension’, the new project should be a social ‘hub’ at the heart of the campus. The College would be involved in the design, construction and ongoing maintenance of the building, using as many of their on-site ‘riches’ as possible. 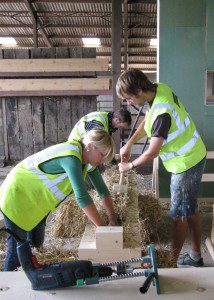 Straw was a readily available organic resource on the farm – a by-product of the agricultural industry – and an obvious choice for insulation. We had not built with it before, but did a little research and found a local subcontractor (Modcell) who were experienced in constructing pre-fabricated straw bale panels. The pre-fabrication was an attractive feature to us – it would avoid the need for certain lengthy and disruptive on-site processes – an important consideration on an occupied student campus. The load-bearing panels were assembled in a ‘flying-factory’ in one of the farm’s outbuildings by members of the College, architecture students from Nottingham University and staff from Hewitt Studios LLP.

3.  What did you think about the process of working with straw bales?  What worked well, what was challenging?

We found the process of working with Straw Bales reassuringly ‘low-tech’ and forgiving – we were effectively just stuffing straw in a box! Most of the labour was ‘unskilled’, but we still managed to produce a very credible result under the watchful eye of Modcell. The most challenging part of the process was probably the alignment of the timber frame – this is where the professionals stepped in!

4.  Would you work on another straw bale again?

Most certainly, yes! In fact, we are working on four other straw bale buildings as I speak – another for the same client and three more private houses. We have found it to be a very cost-effective and low-impact form of construction, easily within the realms of most contractor’s capabilities. 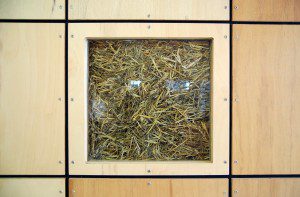 5.  Do you have a funny/quirky story to share about what someone said in hearing that you were going to be building with straw bales?

We had all the usual comments of ‘won’t it burn down?’, ‘what if it gets damp?’, ‘won’t it smell?’ and ‘will mice/rats/birds live in it?’, but probably the funniest reaction was from one of the College students (who had not been involved in the build) after completion. He was absolutely convinced that our straw bale ‘truth window’ was just a sham and that the building was really made by conventional means. ‘I’ve been round the back’ he said, ‘I’ve seen how thin the walls are’. He’d actually seen some of the cladding we’d added to the existing building to make it blend in, but couldn’t be persuaded of this fact! 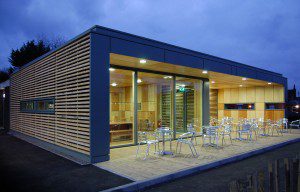 6.  What has the reception been like to the new building?
The reception has been overwhelmingly positive. The building has had great coverage and won quite a few plaudits, but most importantly the College staff and students love it – it is their space, they helped to design it and to build it and it is now far, far more popular than it used to be! Our client, Ian Peake, the Principal of Herefordshire College of Technology sums it up as follows; ’We are thrilled with the Straw Bale Cafe – it recognises that we are at the cutting edge of building techniques – setting an example to our students and employers of what is possible in the best sustainable construction.”
7.  Do you feel straw bale construction is a viable solution to large scale construction?  Can it make a significant difference on our planet?

We do think that this technology represents a viable solution to future building needs and we would love to try it on a larger scale. It is fair to say that there is some reluctance in the British building industry to embrace this method of construction – most contractor’s are quite conservative and see this as a ‘unproven’ or ‘risky’ method of construction. Hopefully, with the example of trail-blazing projects like the Straw Bale Cafe, we can demonstrate that this low-cost, low-carbon technology has the power to make a positive impact on our planet and our lives.

Andrew has a passion for straw bale construction that is matched only by his desire to teach his knowledge to others. He has a wealth of experience in designing and building conventional, tiny, and straw bale homes. After years of building, he has moved his practice entirely to consulting and teaching. He shares his knowledge with thousands of people via his DVD series, this website and the roughly six hands-on workshops he teaches each year.
View all posts by Andrew Morrison →
Straw Bale Q & A
How Much Will It Cost?