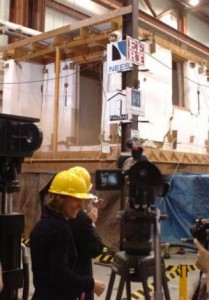 I want to start by sending Gabriella’s and my love, prayers, thoughts, and hope to all those effected by the recent earthquakes in Japan and New Zealand.  Clearly the tsunami in Japan was behind the majority of the death and damage, but the impact that earthquakes are having around the world on human populations cannot be missed. As is often the case with deaths associated with earthquakes, the housing in which people live can either be the shelter they so desperately need or a deathtrap.

Over the years, many people have looked long and hard at how straw bale structures perform in earthquakes. From the early pioneers such as Bruce King (who identified the seismic resistance qualities of straw bale construction) to the recent work done by Darcey Donovan (who spearheaded the shake table study at the University of  Nevada, Reno shown above) these engineers and many others like them have long touted straw bale construction as a smart choice in earthquake prone areas. Let’s take a look at why.

It’s important to remember in construction that a building acts as a unit. In other words, you cannot think only about the shear strength of the walls or the ability of the roof to resist winds. When wind pushes up on the roof, the roof wants to lift off of the walls and the walls want to either go with the roof or collapse into the home. The connections at every point through the house have to be considered and built to withstand the forces that can and will act upon them.

I’ve heard from many people who live in straw bale homes that their properties have done well in earthquakes. There are a lot of engineering numbers out there to support this idea too. Like I said earlier, a lot has been done to understand just how safe a straw bale building can be. I, for one, would like to hear more as we see the level and intensity of earthquakes increase.   If you know of any other studies of value, please let me know. I plan to undertake a comparison study in the near future testing the strengths and differences of post and beam bale walls, load bearing bale walls, and conventionally framed walls.

If you are interested in helping out with this, please let me know. I already have an engineer on board, Nabil Taha of Precision Structural Engineering, Inc. He is very excited and passionate about this project and straw bale construction in general. We are looking for help finding funding, most likely by means of writing  a grant request. In addition, we would love to have some people who are excited about this idea on board to help with all the many details that will arise from the project. Exactly what that means, I don’t yet know! Please leave a comment here if you are interested in helping in any way or if you know of other folks currently working on a similar project/study. Thanks.

Andrew has a passion for straw bale construction that is matched only by his desire to teach his knowledge to others. He has a wealth of experience in designing and building conventional, tiny, and straw bale homes. After years of building, he has moved his practice entirely to consulting and teaching. He shares his knowledge with thousands of people via his DVD series, this website and the roughly six hands-on workshops he teaches each year.
View all posts by Andrew Morrison →
Support People Doing Good Work
Inspire Others by Registering Your Straw Bale Home