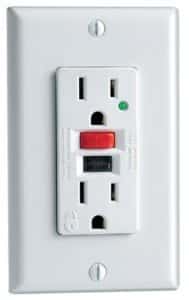 I have been a member of a straw bale list serve for quite a few years and every so often an interesting conversation emerges. This one is an ongoing debate about the safety of running electrical wires through straw bale. I’ll keep you posted as this conversation evolves. (The comments of other people are in italics.)

I’ve been kinda wondering lately about the potential desirability of having all electrical circuits in bale walls protected by arc fault breakers. Where I live, circuits serving bedrooms are required to be arc fault protected. I’m thinking that any/every outlet box in bale walls might be well served if they were arc fault protected since if there is a fault that generates a lot of heat – the straw might ignite and smolder for days before anyone notices a problem.

Any thoughts? Downsides? (The cost is about $20-25 more than a standard breaker. Seems like cheap one time insurance…)

If you mean ground fault interrupt breakers, they aren’t going to protect against generating a lot of heat (regular breakers do that).

What they do is ensure that the current isn’t traveling a path other than the wires themselves. If you have a circuit which is arcing to ground, they would trip for that.

The downside to GFCI is that they can sometimes trip for large motors with large startup currents. This is one reason they aren’t mandated for all circuits.

Note: I don’t think it is a great idea to bury wire in the straw bale at all. If something goes wrong you need to rip apart your wall to fix it, or even if you want to change it. I would put wire in chase (say a baseboard) interior to the walls.

My comments on this issue:

I agree with the idea of placing wires in a chase to some extent; however, there will always be wires in the bales as switches and plugs are located within them on at least some walls. If this is true, then running wires in a conduit or chase, if not already a necessity to the design, would be a waste of time and money. Sure you get to access the majority of the wire along the path should something go wrong, but you still have to rip up the wall to fully service it.

More importantly, how often do you anticipate needing to replace your wiring? In most cases, and I mean MOST, there will never be a reason to replace the wiring as long as the owners live. For me, adding cost to an already expensive building for such a “possibility of necessity” is a bad idea. Again, if the design supports it, great! We did a house where all the bale walls were up on an 18″ pony wall on the second story to get above the roof line of the first floor. That made an awesome chase for wiring and actually saved the client money because the electricians could simply pull all their ropes through a big open space behind the pony wall. They loved it! So, work within the design and pay attention to the cost of adding little details when they are really not necessary.

Andrew has a passion for straw bale construction that is matched only by his desire to teach his knowledge to others. He has a wealth of experience in designing and building conventional, tiny, and straw bale homes. After years of building, he has moved his practice entirely to consulting and teaching. He shares his knowledge with thousands of people via his DVD series, this website and the roughly six hands-on workshops he teaches each year.
View all posts by Andrew Morrison →
Say “No” to Straw Bale Roof Insulation
More on Electrical Work in Straw Bale Construction