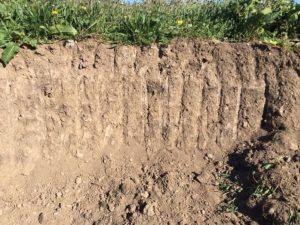 I just went through a humbling process on a new home construction project. I used a sub soils report prepared by a geotechnical engineer and provided by the land owner for a home site I was to build a custom home on. The sub soils report showed that there was fill from ground level to 3 feet down and that below that (from 3′ to 7′, the depth of the test pit) was “medium stiff, red-brown clayey SILT; moist.” That spelled out native soil to me and the report further stated that the foundation requirements for such soils were standard spread footers over a compacted rock base of roughly 4″ thickness.

Here’s where the humility comes in: I actually proceeded as if this engineered report was accurate. That seems like a fair assumption, but proved very expensive. The report was a couple years old, and when I compacted my gravel base on the site, the City wanted a new geotechnical report report they would approve the compacted fill and allow me to form my footers. I called my own geotech and asked him to come out for a site visit. he had us dig a test pit and when we did so, he was not convinced the soils that were quoted at 3′-7′ were in fact native. He asked my backhoe driver to keep digging. It was not until 13′ down that we knew he was right. We starting bringing up 40 year old garbage! The “soil” the previous geotech had identified was in fact 40 year old fill over an old personal garbage pit in the old property owner’s back yard.

A simple foundation changed to something very elaborate. We had to follow the native soils below the fill line all the way around the house and pour a sand/cement slurry to fill the now very deep, three feet wide holes. All of the rock had to be removed from the site so it would not end up contaminated and then replaced on the finished grade after the slurry was poured. The ultimate cost of this work was over $7000 and a time delay of one month ensued from the date of the geotech report request to that of completion of the new requirements. Yikes!

So, know your sub soils. Know what is under your ground. Be certain that what you are building on is solid and can hold your structure. Although this was a slow pain in the rear end to deal with, I always prefer to deal with potential problems up front rather than having to fix them after the fact. The time and money spent on this project far outweighs the potential disaster that could have occurred had we not been required to get a new report. Of course, the fact that I relied on a previous geotech report is something of a frustration. The report, although 2 years old, should have been accurate and it was not. You can be sure I will write a letter to the company owner of the old geotechnical engineers on that one!

Andrew has a passion for straw bale construction that is matched only by his desire to teach his knowledge to others. He has a wealth of experience in designing and building conventional, tiny, and straw bale homes. After years of building, he has moved his practice entirely to consulting and teaching. He shares his knowledge with thousands of people via his DVD series, this website and the roughly six hands-on workshops he teaches each year.
View all posts by Andrew Morrison →
You HAVE to Know Your Critical Path on Your Build
Using Engineered Shear Panels in Your Straw Bale House