By Andrew Morrison in Workshops/Trainings 3 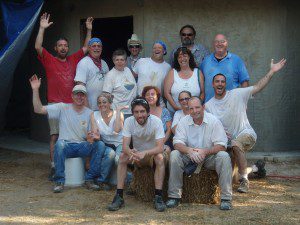 During the workshop in Hico, Texas, we built a beautiful and sacred meditation chamber for Donna and Charles. It was a special week and one I won’t forget for a long time, if at all. We began the week with Native American sweat lodge, a tradition that Charles and Donna have been living and learning from their teacher Grandfather, for many years. It was a beautiful way to start the week. It’s hard to tell from the photos, but this is a round structure and the sound inside it is simply amazing. The singing which took place during the construction echoed and played off the walls like magic. Truly it is a special place. 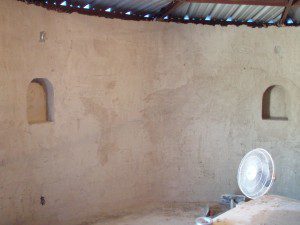 The people who came together to be a part of this project were also amazing. Some traveled from short distances within Texas while others came from across the planet, from as far away as Copenhagen, Denmark. The gathering of souls was powerful, as groups always are, but somehow there was a different sense of purpose in this group. Because we all knew we were building a sacred space, something shifted, in me at least as I can’t speak for anyone else. What I can say is that I feel grateful to have been part of this amazing project. I know that my energy will be a part of the structure and the healing it shares with the world forever. That’s beautiful.

Now this was Texas, so I knew things would be a little different than what I’m used to here in the Northwest. I’ve always heard that “everything is bigger in Texas.” Well, that’s true on many levels, but not for trees and mountains. For example, John picked me up at the airport and on the way to the site he showed me a “mountain.” Ya’ll in Texas seem to think that anything above 10 feet is a mountain! 🙂 As you can tell by my writing, it was a task of the participants to teach me how to speak Texan. I never quite got it down, but I tried. One things for certain, there is such a thing as Texas hospitality. I loved hearing “yes mam” and “yes sir” all the time. There was a sense of respect in much of what was said while I was in Texas from the airline agent to the folks in the group. Thanks for a great experience. 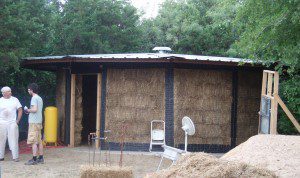 If you’re interested in really learning how to build with bales and you want to have perhaps one of the best weeks of your life in the process, then come to one of our workshops. We ALWAYS have a good time and you will gain the confidence to build your own house too. CLICK HERE to see what workshop locations and dates we have available this year!

Straw Bale Construction and Women
A Summary of the Tennesee Workshop

3 Responses to Building a Sacred Meditation Chamber in Texas