When people consider building with straw bales, they most often find their top concern is how to protect the bales from rain. All too often, snow is not considered a threat to the structure. In most cases, this is true; however, in areas where large snow drifts are the norm, the impact of snow cannot be overlooked without consequence. It is typical that climates with a lot of snow, especially powdery snow, will eventually blow hard enough to create drifts. Those drifts will pile up on whatever interrupts their path, even if it happens to be your front door! Learn about snow drifts and straw bale construction in this article.

If you expect to have snow drifts as a common occurrence on your property, you can do several things to protect your straw bale house. The first is the most simple: plant buffers. Snow drifts are created by prevailing winds working hard to move snow around. As I said earlier, the snow will pile up against anything that interrupts its path. In order to avoid piling snow against your house, give it something else to pile up on. By planting low and think shrubs around the home, you can not only improve the look of the property but also protect your house from drifting snow.

A second line of defense can be planted further from the house in the form of trees. They serve the same purpose as the shrubs, but interrupt the wind further from the home which will help the shrubs handle whatever wind and snow does make it through to them. The trees can be planted such that they help with heating and cooling costs as well via solar gain and shading as well as the disruption of the winter winds. 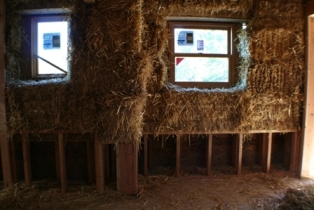 A more drastic approach is to build the bales up on a framed platform. Instead of placing the bales on 4x toe ups, build a double pony wall: one pony wall at the exterior toe up location and another one at the interior toe ups. The height of this wall depends on the expected height of the snow drifts.

Use standard construction techniques to build these walls and sheath them with plywood for lateral stability. By covering the exterior pony walls in house wrap, you protect them from the affects of standing snow. One advantage of building this way is that the installation of plumbing and electrical is made considerably more simple. The wires and pipes can be run through the open space beneath bales and then that space can be heavily insulated.

The extra cost for lumber and labor to build the pony walls can therefore be recouped by the labor savings for the plumbing and electrical installations. Check out the ease of running lines in the picture below. All this while protecting the bales from snow drifts that might otherwise melt against the wall and cause moisture problems in the bales. 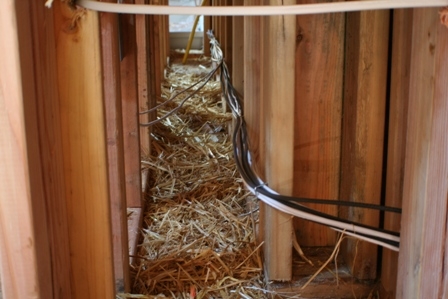 Andrew has a passion for straw bale construction that is matched only by his desire to teach his knowledge to others. He has a wealth of experience in designing and building conventional, tiny, and straw bale homes. After years of building, he has moved his practice entirely to consulting and teaching. He shares his knowledge with thousands of people via his DVD series, this website and the roughly six hands-on workshops he teaches each year.
View all posts by Andrew Morrison →
Building with Straw Bales on a Steep Slope – StrawBale.com
Straw Bale Houses and High Wind – StrawBale.com