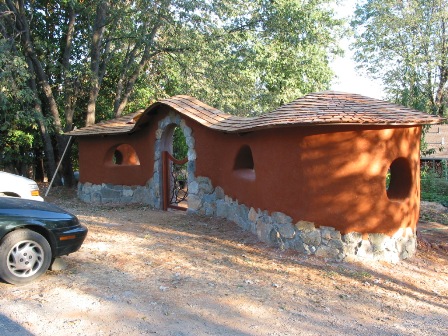 It must be something in the air. I have received a bunch of emails about building straw bale landscape walls in the last week. This after a long drought of such questions. So, I guess it is time to talk about them again. The majority of the questions I have been getting are around the foundation system and the restrictions of building a landscape wall with bales.

(Note that in the diagram below, the foundation is not properly insulated. I use this photo solely as an example of a deep rubble trench assembly) 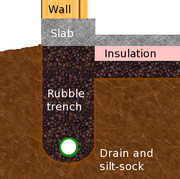 Let’s start with the foundation. I prefer a rubble trench foundation for landscape walls as the need for concrete is low and the need for positive drainage is high. I want water to move away from the wall. I also don’t want the wall to heave and shift with water and freezing cycles. A rubble trench foundation does a great job of protecting the wall from such concerns and also provides a strong foundation for the wall to sit on. Check out the image of a standard rubble trench above. Note that the gravel goes below the frost line and that the drain in the bottom moves any water away from the wall.

It is best to slope the bottom of the trench with a 1/8″ per 1′ slope from end to end. On a long wall, this can be a big difference in depth from the start to the end of the wall, so be prepared for that. The drain should be wrapped in soil fabric and then covered with clean 1 1/2″ river rock. The round river rock is best because it does not need to be compacted mechanically. It will compact on its own under the weight of the material above it. Being that you are surrounding a plastic pipe with the rock, this is a good idea as a mechanical compactor that close to the pipe would probably break it.

Once you have the river rock in place, you can add recycled rip rap (old concrete scraps) or rock. I prefer to use 3/4″ minus gravel and then compact it in 4″ lifts as I fill the trench. For me, compaction is key and rip rap is hard to compact well. You can use the ri[p rap and then pour a very wet concrete slurry into the trench to bond all the rip rap together. The slurry flows into the voids between the rip rap and makes one big solid unit of the material. Be sure to get the mix ratio right on the slurry or you will end up with a bunch of cracked, flaky junk in the trench.

The question of how to top that trench is the next issue. A standard application, as shown in the above image, is to use a steel rebar reinforced concrete cap. This cap serves a few purposes. First, it ties the whole system together in one solid piece. Second, it provides a base for the structure above it and gets that structure off of the ground. Third, it provides a place to attach hold downs and anchors for the above structure.

This is a simple and accepted method in most jurisdictions. The use of concrete is obviously not the most green application, so there are other options. On a house, I would likely stay with the concrete cap or grade beam, because of the uplift resistance it provides. For a landscape wall, I am willing to let that go and move into a more green concept. 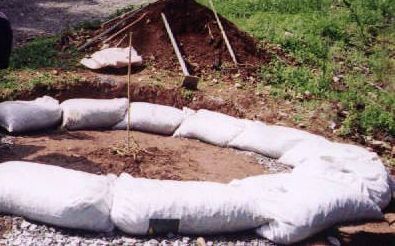 Another option is to use earth bags. These are poly bags, like standard sand bags, filled with dirt and a small amount of concrete to help them set. Although not a great picture, you can see above how they are stacked on top of the rubble trench to provide the lift above grade for the structure and how they create a surface for the wall to be built on.

The bags in this picture need to be tamped down in place such that they end up level and fully compacted. This is a bit harder than leveling a concrete grade beam, but worth the effort to stay “green.” One thing earth bags don’t provide is any resistance to uplift forces so anchor bolts are not an option with this system. That is fine on a small landscape wall, but not something I would recommend on a house as I mentioned above.

The biggest limitation with landscape walls is the out of plane forces. This is the loads, like wind, that are placed on the surface of the wall that may make it fall over. You must be careful to design for this. As the wall gets taller, you will need to add buttress walls to support the out of plane direction. I have another blog post about buttress walls so I won’t go into that again here. Nonetheless, be aware of the need to add them if your wall starts to get tall. You can limit or avoid buttress walls by curving your landscape wall so there are no straight, unsupported runs. The curves will actually create support for themselves along the length of the wall.

Another limitation is the weather resistance of the wall. As you can see on the cob wall at the start of this post, roofs are a good idea to protect the wall from weather. That said, there is nothing wrong with building a wall without a roof as long as you don’t mind the eventual rot of the straw in the wall as long as you plan for it. If you use steel mesh to reinforce the plaster and strong plaster (either lime or cement based) then the eventual rot will not be a concern.

The mesh and plaster will ultimately support themselves even after the bales rot out some 40 years from now. Being that the bales are not used for insulation in this application, they can be considered natural plaster forms and their sacrifice is acceptable. If you want to delay that rot, consider using a pond liner over the top of the wall extending down the top course. Place the liner under the plaster mesh so that the plaster is still attached to the steel for the reasons discussed above (strength and longevity).

Have fun with this project. You can do all kinds of things with landscape walls and create really special spaces in your yard or garden.

Andrew has a passion for straw bale construction that is matched only by his desire to teach his knowledge to others. He has a wealth of experience in designing and building conventional, tiny, and straw bale homes. After years of building, he has moved his practice entirely to consulting and teaching. He shares his knowledge with thousands of people via his DVD series, this website and the roughly six hands-on workshops he teaches each year.
View all posts by Andrew Morrison →
Getting Started on Building Your Own Straw Bale House
Empowering People to Build Green (A Short History)