By Andrew Morrison in Helping Each Other/Personal Stories, Homes For Sale 1 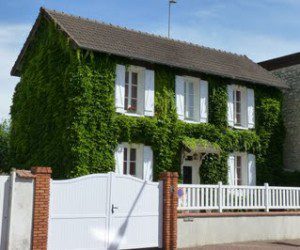 If you have ever wondered what the oldest straw bale structure in Europe is, you can stop wondering. It’s this home, built in 1921 in Montargis, France. No, it’s not a ChiaPet either, those vines are growing on the surface of the plaster and there are no signs of any degradation of the plaster as a result. That’s pretty amazing to me as I know how strong vines can be and how often then destroy plaster finishes or push their way through window jambs and roof eaves. This is truly a clear indication of the strength of the plaster on this structure. This house is 91 years young and still going strong! It does, however, need our help.

The house has been for sale for over a year now and a group of straw bale enthusiasts, the RFCP or French Straw Bale Building Network, are looking to purchase the property and preserve it for the future. They hope to show it off as a model for healthy, innovative, and efficient construction to those who would listen (many as we are all learning). And as the oldest straw bale structure in Europe, there’s good reason to support their efforts.

Even though it was built in 1921, it used the same techniques for construction that are currently approved in the straw bale building code recently validated in France. Furthermore, the home actually has energy efficiency standards that would have met the requirements in 2005. That’s pretty impressive and clearly the builder, an engineer named Feuillette, had a vision of something better than the norm of his time. 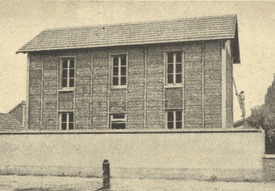 The RFCP worked hard to raise money through donations to purchase the property. It’s not cheap, and their goal of 250,000 € was lofty to be sure. Every donation helps, and many individuals became a part of history by helping to preserve this beautiful home.

Andrew has a passion for straw bale construction that is matched only by his desire to teach his knowledge to others. He has a wealth of experience in designing and building conventional, tiny, and straw bale homes. After years of building, he has moved his practice entirely to consulting and teaching. He shares his knowledge with thousands of people via his DVD series, this website and the roughly six hands-on workshops he teaches each year.
View all posts by Andrew Morrison →
Meet the Oregon Workshop Host
Using Plastic Bottles as Lights